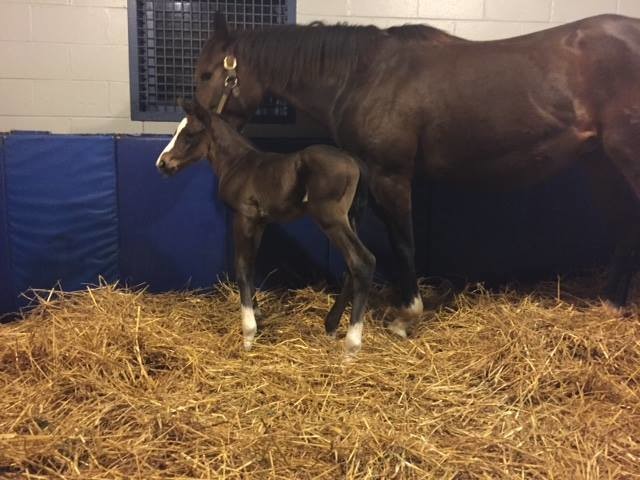 The first foal of 2015 Triple Crown winner is on the ground! Congratulations to all connections.

Brookdale Farm of Versailles, Kentucky announced yesterday that what is believed to be the first foal of American Pharoah has been born! The bay colt was born Tuesday morning just after midnight, the first foal to maiden mare Kakadu.

American Pharoah, of course, needs no introduction: the son of Pioneerof the Nile won the Triple Crown in 2015, breaking a 38-year drought without a Triple Crown winner, as well as the Breeders’ Cup Classic. In his first season at stud in 2016, Pharoah’s book consisted of a staggering 208 mares, including stakes and graded stakes winners. Reportedly, the quality of mares would be impressive for a mature, proven stud, let alone a first-crop stallion.

Kakadu raced once as a three-year-old before retiring to broodmare; she is a daughter of Tizway by Tiznow and out of an A.P. Indy mare. She is owned by Oussama Aboughazale of International Equities Holding Co.

Brookdale Farm is a boarding and sales preparation facility, counting numerous champions among its foal crops and sales graduates. Ranked in its Hall of Fame are I’ll Have Another, Tapit, Stopchargingmaria, Bodemeister and Lost in the Fog, among many others.

This first foal of American Pharoah certainly has the pedigree and the connections to be a champion — time will tell! In the meantime, we congratulate all connections.