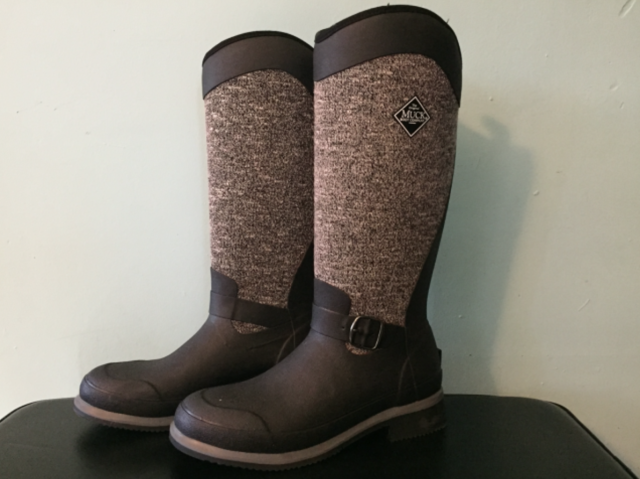 Leslie Wylie checks out a new, improved and way cuter update of her favorite winter boot.

I am NOT a cold weather person. I am a 100% southern born-and-raised hothouse flower, prone to psychological frostbite the moment temps dip below 72 degrees Fahrenheit.

Despite the fact that I live in Tennessee, which has relatively mild winters, I would hibernate completely were it not for one thing: my horses. And not only do horses possess the power to draw me outside into the elements, they’ll keep me out there for hours at a stretch on a daily basis.

Hardcore bundling up is my survival strategy, and insulated boots from The Original Muck Boot Company have always been a staple of my stay-warm gear. These days there are lots of equestrian winter boot options out there, but nothing I’ve tried compares to Muck Boots’ neoprene shell construction and natural rubber uppers. A pair I picked up at the local farmer’s co-op several years back has held up for me winter after tortuous winter, and I’m sure they’ll last me several more. From ankle-deep mud to slushy snow to underwater rings, they’ve never failed to keep my feet toasty and dry.

I feel bad saying a single negative thing about my trusty old Muck Boots, which have served me so well. If I had to nitpick, though, I’d change two things: One, they’re a bit clunky and stiff for in-the-saddle wear. Two, and this is so embarrassingly superficial — no offense, trusty Muck Boots! — they’re just not that … cute. To my great delight, it was recently brought to my attention that the Muck Boot Company has expanded its product line in the past few years to include boots that are functional and stylish.

Exhibit A: the Reign Supreme. These winter equestrian boots tick all the boxes that made me fall in love with my original Muck Boots — they’re 100% waterproof and have a comfort rating of -20°- 50° Fahrenheit, which is way more ammo than I need but I’ll take it! I heart the soft fleece lining that is warm yet breathable. Add some thermal socks and I feel like you could go hiking through the Arctic in these bad boys, so I’m pretty sure I’ll be snug as a bug putzing around the barn even on the coldest winter days. The Reign Supreme has updated its silhouette as well. The tall slim profile hugs my lower leg in a form-fitting way, and there’s no gap at the top for rain or snow to sneak its way in. They’re lightweight and flexible, and pulling them on and off is a breeze.

The foot is roomy enough to accommodate a heavy duty sock, and — this is so important! — the toe box has wiggle room. Loss of circulation from squished toes = numb toes, and I prefer to be able to feel all my body parts at all times! The removable etc® Sockliner is a practical touch.

The articulated heel is safe and functional for riding, and the gripping horizontal tread outsole ensures that my foot stays in the place in the stirrup iron. And, of course, that I don’t go ice skating when I’m on the ground. I had the opportunity to put my Reign Supremes to the test in the saddle during a recent dressage clinic. I was the first ride of the day, at 8 a.m., and it was literally 20 degrees outside. I went to put on my tall leather dress boots only to discover, to my horror, that they were literally frozen to my trailer tack room floor — I guess they’d had some moisture in them. Not in the mood to encase my lower leg in a literally block of ice, I rode in my Reign Supremes. They performed well, kept my feet toasty warm and rather than giving me a lecture about showing up in proper attire my dressage trainer actually complimented them!

My fingers, on the other hand … I had to stop several times during the lesson to blow on them because they kept going numb. Request to the Original Muck Boot Co.: Can you start making gloves, please?

But here’s the real kicker: they’re as good looking as they are hard working. Not that I haven’t worn my old Muck Boots into the grocery store and other “real world” destinations, but I always had the feeling that I was on the fashion police’s most-wanted list.

These, though, I’ve actually worn in public on purpose! Paired with some skinny cords or woolly knee socks and a skirt, my Reign Supremes turn heads in a good way. The heathered knit upper and side buckle add a sophisticated touch. The Reign Supreme is available in black/grey or brown/bison and retails for $179.95. Check ’em out at The Original Muck Boot Company.