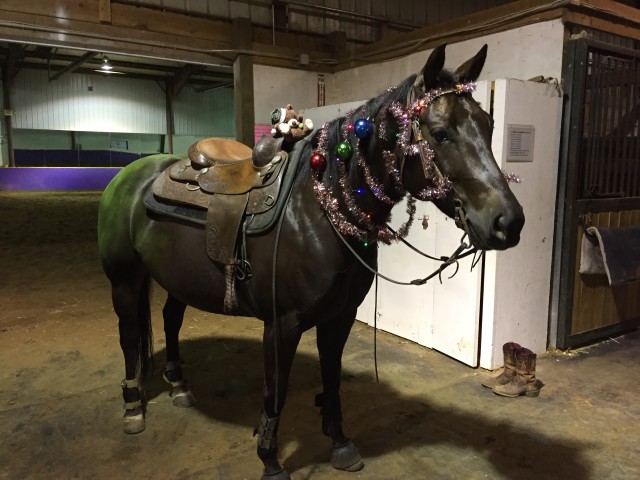 Haley Ruffner just took — and likely passed — the most exciting final exam of her academic career, the musical freestyle reining for her Reined Cowhorse class.

Jeri, the best Christmas tree that ever was. Photo by Haley Ruffner.

Not to brag, but my first final exam of this semester puts all other exams that exist to shame. With a group of my friends and classmates, we each choreographed an individual reining freestyle set to music of our choice, then worked together to compile a group freestyle along with both of our coaches, Harry Hurd and Steve Shank.

My favorite part of the evening, however, was our group ride. Set to holiday music, Kait Koester aboard sweet old Paulie dressed as reindeer, Sterling Campbell rode the eager-to-please mare RStar as Frosty the snowman, I rode Jeri, decorated with lights and tinsel as a Christmas tree, Nellie Burch in a purple jumper with Gunny, mane adorned with ribbons and bows, and Santa Claus himself as Ellie Woznica and her horse Batman.

Each horse and rider pair had a song in which they were featured while the rest of us rode around them—first, Frosty did some figure eights and spins, followed by some trot leg yields and spins. Next, to the song “I Want a Hippopotamus for Christmas,” Nellie and Gunny rode through us and rejected our offered gifts of dolls and Tinker toys. From there, Santa Claus came to town straight down the arena for a rundown and fifteen-foot sliding stop. “Run, Run, Rudolph” played next, and somehow our group managed to weave between each other at a trot without colliding while Comet and Rudolph ran circles at one end. Transitioning songs again, the group rocked around the Christmas tree in a wagon wheel formation while Jeri and I spun in the center.

Shortly, though, our music cut off — and in ran the Grinch, Harry Hurd dressed in neon-green spray-painted Wranglers, button-down shirt, and cowboy hat. He rode Max, otherwise known as Sunny, a palomino gelding who so tolerantly let us strap a single antler to his bridle. We scattered, and he came to a sliding stop and spun around, looking for us. After stopping, he growled (we all laugh-screamed, doubled over in our saddles as we “ran away”) and gave chase. Nellie, the Christmas present, fell from her horse and was captured and dragged away.

The final act, however, was undoubtedly the crowd favorite. “Grandma Got Run Over by a Reindeer” blared through the speakers, and in hobbled Steve Shank, our other coach. He wore a green-and-blue striped dress reminiscent of a dish towel, a cream-colored headscarf, a pillow under the dress baling-twined to his backside, and, to top it all off, pantyhose, all graciously purchased the day before by Harry from the Salvation Army. He staggered through the arena with his cane, the result of a bad leg and too much eggnog, and Rudolph ran by and knocked his cane away. After a slow-motion pirouette, Steve fell on his back and gave everyone a good look at his pantyhose before his wife, Peggy, ran through to help him out (and re-adjust his pillow).

Our pre-ride nerves, hard work throughout the semester, and laughing until it hurt made that evening one to remember for all of us. Harry said it was the best freestyle ever, and although we aren’t sure if that was a result of Steve’s acting or our riding, we are proud of our rides and of each other. Reined Cowhorse is, and I suspect will remain, the best class I have ever taken.