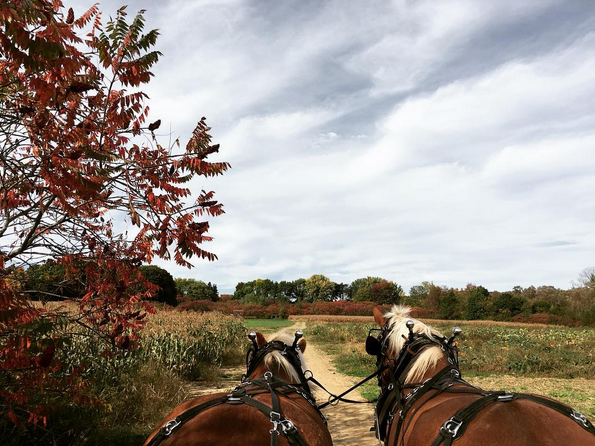 Kristen Kovatch can’t stop waxing sentimental about her draft horse team, but she’s inviting us along for the wagon ride. In her latest essay, she discusses the team as its own entity.

I’ve tried — and failed — to appropriately describe the massive, stalwart presence that draft horses possess, that kind of sense of earth-moving power contained in an elephantine grace, combined with the rest of the horse’s lovable traits of friendship, loyalty and heart. I’ve tried to express how driving a draft horse, witnessing these great creatures humbly drawing a wagon or pulling a farm load is a far different experience from riding one.

While driving my draft horse team, the ineffable Belgian duo Rocky and Randy, I managed to grasp for a fleeting moment just what made that experience so special: it’s the team. It’s the moment when two individuals come together and manage, somehow, to build something greater than the separate parts.

Let me back up here and describe these two horses, because however much I say “Rockyandrandy” like it’s one word, they’re unique.

Randy, for being a broader, more classically “farm” looking horse — all barrel and thick neck and unelegant noggin — is mercurial, his personality shifting from suspicious to bold to anxious to needy to rude to friendly. In harness, he’s either insistently shouldering the brunt of the load or lagging behind lazily because he threw his weight too big too soon. He’s not shy about expressing his feelings.

Rocky is, well, the rock of the team. He is the even keel, the steady presence, always willing to go to work but never too bold or too dull in harness. He’s aloof; I often see him staring out over the horizon as though he’s waiting to see something headed his way. He’s much leggier than Randy, more elegant through his head and neck, snappier through his knees and classically marked. If Rocky has opinions, he keeps them to himself unless he can lay his ears back and give Randy a piece of his mind from time to time.

But together, it’s not Rocky and Randy pulling a wagon; it’s a team. The two halves come together and form something greater than two horses tied together pulling a load — for the two separate identities, the sum total is harmonious, strong, enduring and iconic. When these two horses lean together into their collars and move a wagon, even something as humble as my little two-wheeled forecart, some magic spell is woven, my heart swells and we all of us together become something greater than what each of us might be alone.