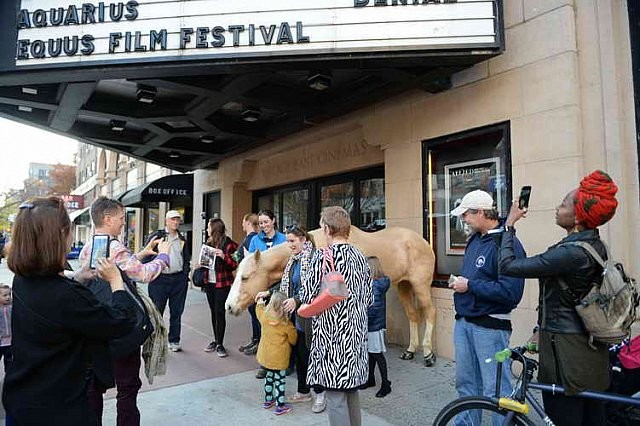 Candace Wade recently attended the EQUUS Film Festival in New York City as a panel moderator and film judge, and shares her perspective on the controversy swirling around the leading sponsor Protect the Harvest.

(Author’s note: Observations and opinions expressed in this piece do not necessarily represent those of Horse Nation or the EQUUS Film Festival.)

The social media autobahn was aflame with the news that Protect the Harvest (PTH) was the big money sponsor at the EQUUS Film Festival NYC (EFFNYC) 2016 held in November. PTH was “involved with the production” of the submitted film Running Wild. I clicked on an e-mail from Horse Nation editor, Kristen Kovatch, on my first day in New York, asking “What is this all about?” My task is to report and not editorialize… I will not succeed.

A Brief History of EFFNYC

Founder/Director Lisa Diersen shared:  “The EQUUS Film Festival was started in 2013 at the Arcada Theater in St Charles, Illinois. My friend Rupert Isaacson was coming to speak at an equine assisted therapy expo. He brought his film about his son and their journey to Mongolia to help him with his Autism. To me, the film was an eye opener to the struggles families of Autistic children face. I asked the owner of the theater if I could show the film. He agreed. What if I could get a few more horse films? Twenty nine films were shown and the EQUUS Film Festival was born.”

A Brief History of Protect the Harvest

Protect the Harvest is a super PAC founded by billionaire Forrest Lucas, head of Lucas Oil Products. The following is off the PTH website. (Protect the Harvest did not respond to my request for comment.) Rolling slogans on the site include: “Helping America’s farmers feed YOUR family;” “Protecting your right to hunt, fish, farm, eat meat, and keep pets;” and over a picture of a horse, “Animal rights DO NOT EQUAL animal welfare: Don’t let radical activists confuse you.”

Protect the Harvest ponied up big bucks to be the “Title Sponsor” of the film festival (the full sponsor list can be viewed here). The Humane Society of the United States and PTH have clashed in a war of words and ideals for several years. The sides are perceived as Big Ag vs. animal advocates; a “farmers’ rights” Super PAC vs. Big Government; wealthy, wild-eyed vegans vs. horse-slaughter and puppy mill advocates.

Some vocal equine advocates were outraged that PTH and their money would be present at the film festival. The HSUS withdrew their sponsorship and participation in a discussion panel on Tennessee Walking Horse soring. A social media maelstrom roiled before and during the film festival. Did the EFFNYC forge a Faustian pact?

On the other hand, a grass-roots rescuer who accepted an award offered, “I can feed a lot of horses with the prize money.”

A few continue to fan the flames on social media. None of the internet turmoil regarding the EFFNYC has focused on actually doing something concrete to assist a horse.

On the other hand, an equine advocate told me, “We have made some important contacts from our appearance at EFFNYC.” Another had discussions regarding the leg action of big lick Tennessee Walking Horses with a Quarter horse owner. The Quarter horse owner was surprised at the clumsy movement he was shown on a TWH rescue video. I feel this kind of interaction is vital for the welfare of horses.

I had not been aware of PTH prior to the film festival. I personall disagree with their mission: I question their claim that horses provide a “vital food source for our nation and many others.” Their Last Ride, shown at the EFFNYC 2015, challenges the PTH claim that the majority of horses transported to slaughter arrived at the production facilities completely unharmed.

However, I discovered what I believe to be a foundation for the conflict in philosophy between advocates and PTH from the PTH website: “Animal rights activists see all horses as pets.” PTH writes that over 98% of horses in the U.S. are either livestock or feral (ergo, of limited value?). With a chasm between philosophies, where do we go from here? The film festival did not resolve the question, but did provide a forum where people could talk to people – not just rant on social media.

Those who chose not to attend left the other guy’s message on the table. They missed the opportunity to participate in discussions – to educate and be educated. Equine advocates traveled from all over the U.S., and from Germany, Brazil, Ireland and Canada and sent films from Saudi Arabia, France, Denmark and Tibet. They were willing to brave the controversy. They helped frame the discussion. They brought ideas.

The money given by the controversial sponsor helped the EFF offer a viewing forum for films like Inappropriate Behavior, made by teenagers with an anti-bullying theme, and Recycled Equestrian, where journalist Jessica Lamb revealed how her horse aided in her recovery from a catastrophic fall. Artists and writers exposed their private journeys. Equine rescue, slaughter and rehabilitation were discussed. And the Australian filmmaker was afforded a thrill: “having my film, She Bought Another Horse, played at EQUUS was just surreal. I mean, really, the biggest equine film festival in the world playing a Hitler-spoof video that was just a little bit of horsing around.”

So, after the angels’ wails wane and the devils’ grins fade, who will pony up the big bucks next year?