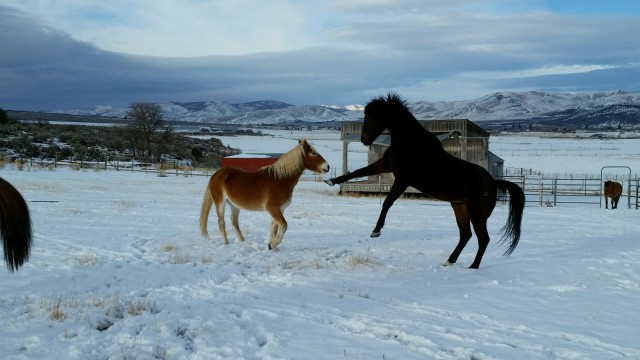 A field full of rescues who think they’re kings of the world!

Ralphie the mustang and Rowdy the OTTB getting feisty in the snow. Photo by Sharron Evans.

My parents put in their hard time in the city for decades so they could retire in style on a little patch of paradise in central Utah where they get loaded with snow, icicles, and horse poop. Literally, every horse nut’s dream. My mother regularly sends me snippets of her many animals (one dog, 12 cats, four horses and four burros) adventuring, dozing, or dueling in one of many idyllic pastures, and it would be cruel of me to withhold them from the fine citizens of Horse Nation.

Ergo, I present, racing chasing horses after a foot of snow. Two of the four-legged fiends you see here are mustangs (Posie of the Sulphur Utah HMA and Ralphie of the Maverick Medicine HMA) and the other two are off-the-track Thoroughbreds with 80+ races under their belts between the two of them. Spoiler alert: the tall ones are the Thoroughbreds.

If that doesn’t put you in the holiday spirit, I don’t know what will. Happy Holidays from our family to yours, Horse Nation!