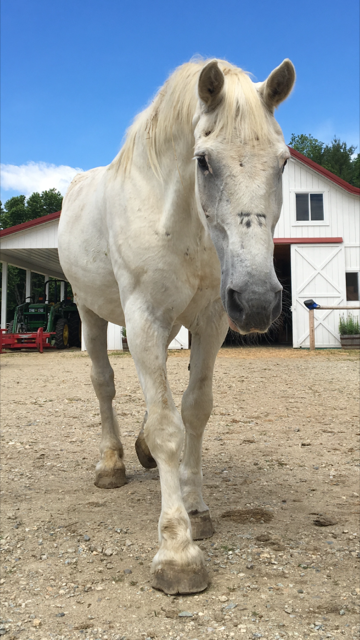 I was given the surprising pleasure (well, I was volunteered) to be one of the film judges for the Equus Film Festival NYC 2016. 149 films were submitted in 40 categories; the first festival in 2013 aired 29. What I expected to be a daunting marathon ended up to be a surprising and satisfying emotional holiday. Equine storytellers brought forth their earnest work to be shared, and in many cases, to educate. Plenty of liquids and tissues at hand – pillow behind my back – feet up on my desk – I settled in to immerse in horse-film bliss.

You can view the full list of winners here, but here are a few of my personal favorites that you may also enjoy.

“Draft Gratitude” was a two hanky for me. Rebecca Roy escorts us through her draft horse rescue of the same name. I didn’t know she was out in New Hampshire “giving retired draft horses the respect of a soft landing” as Rebecca told me. She shared that feeding her current herd of ten horses cost $12 per day per horse. I felt the film combined art with education and compassion without being manipulative. Learn more at the website.

I dragged my husband to see “The Christmas Ranch” at the film festival showing because I felt it represented very sound script writing with equally sound performances in a film that didn’t have Hollywood hype, actors and money behind it. My husband enjoyed it, but with its “if you build it, they will come” finale, it grabbed me.  “The Christmas Ranch” will have its movie-house premier December 8, 2016 at The Senator Theater in Baltimore, Maryland.

“Billy to Rio” absolutely cracked me up. Not one to get all gooey over talking horses (except for Mr. Ed); I found the premier installment submitted to the film festival to be witty with a “move-along” pace. This series was featured heavily on Horse Nation during the amp-up period to the 2016 Olympics, but here’s a glimpse at the first installment.

I shared a tasty Italian dinner in the East Village with Elaine Heney, the executive producer of “Out of the Wild.” We discussed the gut-level honesty and engaging storytelling of the film. Then I realized it was based on a true story from a book by Mark Rashid.

I asked Elaine why she traveled from her home and Connemara pony in Ireland to attend the film festival. Elaine responded, “I have always loved Mark Rashid’s books. I met Mark a few years ago when he and his wife Crissi came to teach in Ireland for the first time. Mark & Crissi asked if I would like to help out with the film, and I was excited to get the opportunity. I flew into New York in my role as executive producer and I was honored to accept the film festival Director’s Choice award on behalf of the whole team.”

Horse rescue and a focus on America’s wild horses were well represented this year. Here are a few selections:

From the Kill Pen

One of the standouts for me was “Wild Horse Resolution” directed by Ben Masters. The film explores a fertility control vaccine that is reversible but keeps mares infertile for one year as a possible humane solution to the Bureau of Land Management problem with managing the population of wild horses and burros.

“Running Wild” submitted by the film festival’s controversial sponsor, Protect the Harvest and Forrest Lucas of Lucas Oil, added a Hollywood touch with actress Sharon Stone. “Running Wild will challenge your understanding of the wild horse issue” is a phrase from the Protect the Harvest website. PTH and the Humane Society of the United States have been on the opposite sides of many equine issues. The film is not available on line.

After all the serious stuff, have some fun with “She Bought Another Horse” by Darren Dawes from Australia.  It’s the horse addicts’ laugh at their own expense. Naughty fun.

Humans rescuing horses – horses rescuing humans – music videos – training films – I was treated to a wide range of films sharing issues and points of view presented with creativity and heart. There are too many for me to list.

Most of the films can be viewed here.