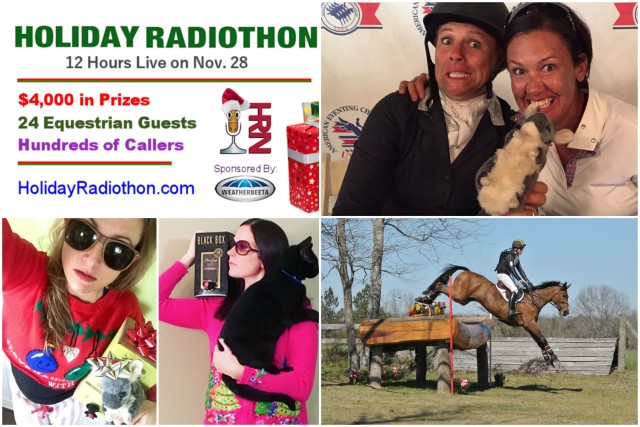 Did you miss out on yesterday’s full day of podcasting horsey holiday fun? Want to go back and listen to any of the interviews again? We’ve got your hookup.

If you were one of the many equestrians who had to return to the Monday grind after a long holiday weekend, you may not have gotten to listen to the Horse Radio Network’s second annual Holiday Radiothon yesterday — and that’s a tragedy! For 12 straight hours, MCs Glenn the Geek and Dr. Wendy along with plenty of co-hosts and a myriad of superstar special guests entertained us, made us laugh, hit us right in the feels and kick-started our horsey holiday season.

Fortunately, all 12 hours are available to replay, divided by hour. We’ve got the links right here so you can go back and listen to any portion of yesterday’s broadcasts!

Hour 1: Horses in the Morning Hour 1 (click to listen)

With HITM co-host Jamie Jennings, the Radiothon kicked off with a bang, featuring guest Kristian Bush of country superstar band Sugarland, who shared his favorite holiday memories (including hanging out with his pal Jamie!) as well as a big announcement about Sugarland! The man, the myth and the legend George Morris was also featured as a guest, sharing this year’s Radiothon theme of his “fantasy ride”: which horse would the George choose to ride, living or present? George Morris also spoke candidly about his life and lifestyle in an inspirational conversation that you don’t want to miss.

Hour 2: Horses in the Morning Hour 2 (click to listen)

Glenn, Wendy and Jamie hosted Steuart Pittman, the founder of the Retired Racehorse Project, as well as jumping legend Melanie Smith Taylor, who both shared their favorite holiday memories as well as their fantasy rides. Also featured are plenty of creative listener voicemails!

This hour was co-hosted by Diana De Rosa, president of American Horse Publications and a leader with the Equus Film Festival. Guests in this hour were filmmaker Julianne Elizabeth Neal, who spoke about her film The Edge, as well as Christina Moore, who wrote and produced Running Wild which starred Sharon Stone.

With co-host Debbie Loucks of the Horsemanship Radio Show, this hour featured a wallop of special guests, including Monty Roberts, Martin Clunes, Allison Brock, Debbie McDonald, Boyd Martin and Nic Roldan — whew! This hour is worth the listen just to hear Martin describe his two Clydesdales, but there’s plenty of content in this hour to satisfy any horsemanship enthusiast.

With co-host Christy Landwehr of the Certified Horsemanship Association, this hour features guests Richard Shrake of Resistance Free Training as well as Patti Colbert of the Mustang Heritage Foundation, the founder of the Extreme Mustang Makeover. If you’re a mustang lover, don’t miss this hour!

With co-hosts Tigger Montague of BiostarUS and Patti Pierucci of Pierucci Dressage, this hour featured guests Olympic dressage rider Allison Brock as well as Joel Salatin, “the most famous farmer in the world.” Listen to both discuss their favorite holiday traditions!

With co-host Helena Bee of the Stable Scoop Radio Show, this hour featured guests Linda Tellington-Jones, the creator of TTouch, as well as Guy McLean, a Road to the Horse champion, horsemanship practitioner and Australian bush poet. You may want to grab a tissue for this one as both Linda and Guy details their fantasy rides and talk about their favorite holiday traditions.

Glenn and Wendy take back over full time to host the Driving Hour, featuring guests “the Incomparable” Barry Dickenson and Ice Road trucker Lisa Kelly. Barry just scrapes the surface of his incredible wealth of history knowledge and Lisa keeps us entertained with plenty of tales from Alaska. Both discuss their fantasy rides (and drives)!

With co-host Lisa Wysocky, a bestselling author in her own right, guests and best-selling authors Cherry Hill and Carolyn Haines dish on their fantasy rides as well as inside peeks at what it’s like to be an author. (Plus, did we sense a potential murder mystery/HRN-inspired Clue-style board game idea?)

With co-host Dr. Tim Harfield (also known as the husband of Elisa Wallace), the much-anticipated Horse Husbands hour featured guests Lt. Col. Chad Jennings (aka, Mr. Jamie Jennings) and Buck Harris (aka the new Mr. Helena Bee). Chad’s interview was voted by listeners as THE best interview of the entire Radiothon… so you won’t want to miss this one!

And as usual, leave it to Nation Media to close out the Radiothon in style: our very own Leslie Wylie and Jenni Autry co-hosted, featuring guests Doug Payne, Tamie Smith and Heather Morris. Everyone dishes on their dream fantasy ride, and re-introduce what’s rapidly becoming an equestrian drinking game inspired by the indomitable Lady Martha Sitwell. Listen in and discover why everyone is standing on chairs yelling “I am Spartacus!”)

The Horse Radio Network features a podcast for every discipline or level of rider, from horse enthusiast to professional horseman! Horse Nation is featured each Monday on Horses in the Morning. Be sure to listen in and find your favorite podcast!