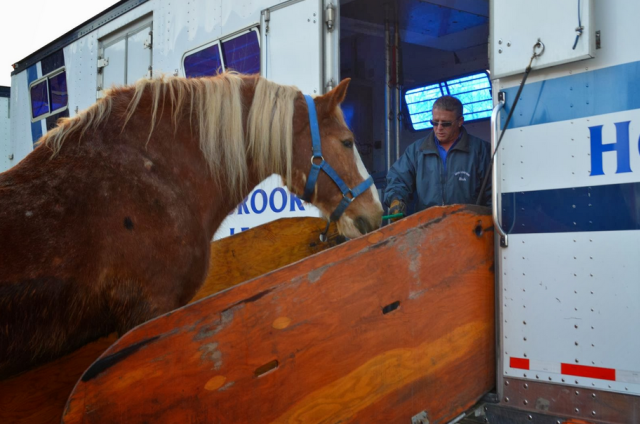 Love knows no distance: Stacey Chepren of “The Jumping Percheron” blog shares the story of how she brought her former carriage partner “Wes” home, 2,100 miles across the country. In Part II, Wes boards the trailer in Salt Lake City.

Stacey Chepren blogs at The Jumping Percheron, chronicling the training and competing process with her full Percheron mare Klein (as well as many other horsey adventures along the way!) One such adventure was the opportunity to bring Stacey’s former carriage partner Wes the Belgian home to Stacey’s barn in Georgia at the time, all the way from Salt Lake City.

When I first met Wes, he was a carriage horse that I worked with before I joined the Air Force. I was really sad to have to leave him: it was love at first sight and I tried to buy him from the company a few times. They turned me down every time, but I promised him the day I left for Hawaii that I would be back for him some day. So, each time I would move to a new base I would let them know I moved, but that my email and phone number were still the same and that I was still waiting for the day they wanted to retire him. I told them in the meantime should he get sick or injured to where he couldn’t work, I was only a phone call away.

Finally in 2013, after eight years of waiting, they retired him and emailed me in August saying that the Christmas season would be his last and that I could pick him up anytime after December 26th. I had launched a Go Fund me to help fund his trip home too because the company caught me a little off guard when they said they were finally going to retired him. Blog readers and people from all of the country donated to it.

“Did you say I was going to Georgia?”

Last week, we met Wes. This week, Wes’ long journey across the United States begins, as told on February 2, 2014:

We did it! We are bringing Wes home!!! Thank you again to everyone that donated, shared the GoFundMe page and sent kind emails with stories and memories of their own horsey adventures.

First, let me say how absolutely AWESOME Brook Ledge is. There is not a better horse shipper out there. Period, there just IS NOT. If you guys need a shipper, you need to call Brook Ledge. They did a fantastic job with Klein and they are proving themselves yet again with Wes. Every single person I have ever talked to in their office, their dispatch, or their drivers is always very, very nice and super helpful. Leslie told me to contact her 24 hours a day if I want to know where Wes is at any time. They called me twice yesterday to tell me they would be at the Salt Lake barn at 9 am this morning. They were actually even a few minutes early!

Brook Ledge in front of the Salt Lake barn!

As soon as Lisa texted me with the above picture of the truck saying “They’re here!” I started bawling. Finally! FINALLY!!!! Wes is coming home!!! She also was great and took pictures this morning.

The drivers were a little surprised at just how big Wes is. When they saw him they actually had to go make his stall BIGGER. I think sometimes people forget that Belgians can be huge: there is a common farm chunk-type body style that you see doing the draft horse pulls but Wes is hitch bred. The hitch bred type is usually a minimum of 18 hands high. Klein was bred to be on a hitch but didn’t make the cut when they realized she would only be 17 hands high. Wes was actually shown quite a lot in the lead on a six horse hitch in Canada out of two different barns. 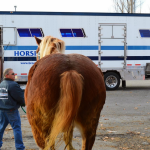 One of the drivers leading Wes out to load. 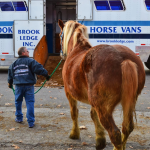 Okay, first order of business is a bath. Lisa said he did as good a job of getting filthy as possible last night. She cleaned him up as best she could considering it was 31 degrees. 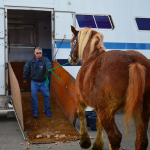 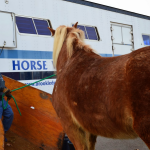 Not too sure about this… 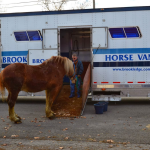 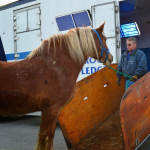 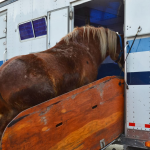 Deciding to trust the strange man.

Wes wanted a minute to check out the rig. He actually had not been trailered since he came in from Denver eight years ago. Lisa said he made me proud: he took a minute to check the rig out then walked right on. That’s my boy! 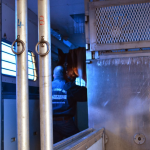 Getting all situated on the rig. 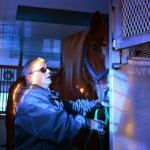 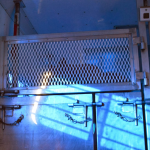 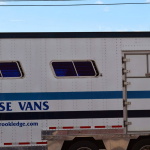 You can just make out his silhouette!

His estimated arrival is sometime Tuesday morning — a little less than 48 hours from departure. Stay tuned for plenty of pictures and an update!

Keep an eye out for Part III, featured next week, in which Wes arrives home at Stacey’s farm, a reunion years in the making. Go draft horses, and go riding!