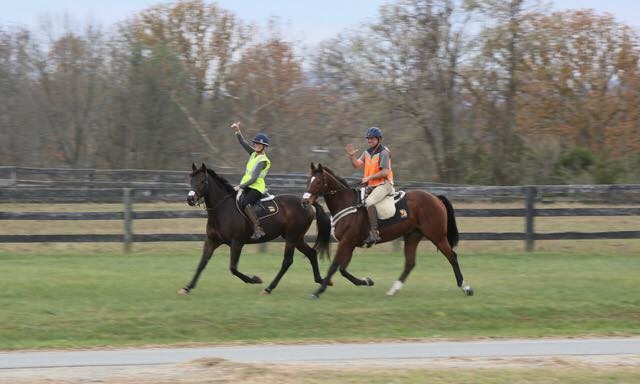 She did it!! Valerie Ashker rode coast-to-coast, completing her 3,500-mile trek this past weekend aboard her trusty OTTB. Meagan DeLisle caught up with Valerie to get her closing thoughts on this incredible journey. Some children say they want to be an astronaut when they grow up, some say a doctor, but Valerie Ashker wasn’t your ordinary child. At the age of 60 Valerie’s childhood dream drew to a close as she crossed the finish line of a 3,500 mile trek with her boyfriend, Peter Friedman, all done on the back of two resilient off-the-track Thoroughbreds. And while the journey has had its own fair share of road blocks, if you will, there is nothing that Valerie would change about any of it.

From the moment Valerie answered the phone until the moment we parted ways, it was as if we had been old friends for a long time. There was never a dull moment or lag in conversation; we laughed and joked and even cried about her determination to accomplish a goal — one driven by a passion to reach out to the horse community about the durability of the OTTB.

A Full Life of Loving Horses

Valerie Ashker grew up moving back and forth between Michigan and California as her parents traveled to stay with family. She recalls sitting in the backseat of her parent’s car and staring at I-50 out the back glass envisioning herself on horseback trailing behind the vehicle.

The only horse crazy kid in a non-riding family, Valerie was first introduced to horses while attending a private school which included horseback riding as part of its curriculum at the age of seven. From that moment on, she was sold. Due to their frequent moves, Valerie was unable to get her first horse until the age of 18, but she fondly recalled memories of the sweet Appaloosa as we spoke.

As she grew, so did her passion for horses and three day eventing. She had her breeches altered to include an elastic waistband so that she could ride through the majority of her pregnancy with her daughter Laine. By the seventh month, she was forced to retire due to what she called her ‘Buddha belly’ which was causing her to become unbalanced. As she raised her daughter in a competitive equestrian environment, they turned to Thoroughbreds frequently to be Laine’s partners and Valerie was taken by their fantastic work ethic.

“Thoroughbreds know no boundaries,” she declared. “They do their all for you if they love you.” As Laine experienced a huge amount of success atop OTTBs, Valerie felt compelled to share more about their secret weapon. “People are going to Europe to buy nice show horses when we have them right here in these race barns.” The high level of success includes Laine’s most famous partner, Anthony Patch, an OTTB who has completed the Rolex Kentucky Three Day Event CCI4* four times and the Burghley CCI4* once, as well.

The Journey of a Lifetime

“It was time for me to not just talk the talk,” claimed Valerie when asked what pushed her to pursue such a daunting journey, “I had to walk the walk.” Powered by a drive to enlighten the world about the versatility of these ex-racehorses, she began to plan to make her childhood vision come true.

“It was never just a bucket list item, it was always for the horses. These OTTBs put Laine on the map and it was time to give back.” As the industry caught wind of her vision, countless entities popped in to help out. County Saddlery created a custom saddle for Valerie to help her get across the country as comfortably as possible. Nutrena has donated thousands of pounds of grain; both her horses are fed 18 lbs a day. Valerie and Primotivo on their journey. PC: Peter Friedman

With the comfort of their partners in mind, Easy Care Boots donated thousands of dollars worth of products so the horse’s hooves were in tip-top shape along the journey. Thanks to Dr. Cook’s Bitless Bridles neither of the horses wore a bit for the entire ride.

To make the trek, Valerie chose Primotivo, a 7 year old OTTB as her mount. Primotivo raced only 3 times and came in dead last each race. At 15.2, Primotivo is a bit on the smaller side but size has played no role in the horse’s qualities or abilities.

Primotivo has ridden along busy highways beside cars whipping in and out of traffic and has been a reliable mount for Valerie along the way. Originally, Valerie’s boyfriend, Peter, was supposed to drive the truck and trailer that would follow the horses along the journey, but Peter had other plans. “He decided he wanted to ride too,” she said with a laugh. “He was worried I would get lonely and wanted to provide me with company, which I actually wound up needing.”

When selecting a horse for Peter, who doesn’t ride frequently, Valerie chose Solar Express, a 17-year-old OTTB who on paper may not sound like the best mount for a six and a half month journey. Solar has PSSM, a genetic disorder rare in Thoroughbreds that prevents proper storage of glucose and can cause lethargy and tying up. The gelding also harbors a small bout of arthritis, but Solar never let that slow him down.

“This whole time he has had his eye on the prize,” said Valerie. “His ears are always pricked forward. I’m looking at them now, they are both turned out in a field at a friend’s place where we were able to rest for a couple days and they are both restless. They are pacing in their turnout; they are both so spunky. They are ready to go.” Solar and Primotivo were the only two horses that Valerie and Peter rode for the entire trek.

When we spoke last week, Valerie was preparing herself for Saturday when she would reach her destination in Virginia and this chapter of her life will draw to a close.  As we talked about life post-journey, Valerie grew emotional and I could hear the tears in her voice. “I never doubted I would make it to the end,” she said as she choked back tears. “This has been the toughest thing I have done in my whole life. It’s the first time I actually feel my age. But I wouldn’t trade all the nice things like wearing nail polish or putting on mascara for this six and a half months to grow with my horse.”

After crossing the finish line, Solar and Primotivo will go to stay with Laine as Valerie drives back to California to finalize the sale of her farm and ship her remaining five horses to Virginia to be with her daughter Laine.

As she tearfully thinks back on all the people who have supported her along this remarkable adventure, Valerie expressed an immense amount of gratitude. “People I don’t even know are flying out to meet me at the finish line. Countless supporters encourage me every day. So many people allowed us to stay with them as we made our way along. It has been an unbelievable experience.” As for her mission to raise awareness about Thoroughbreds, that is far from over. Valerie dreams of creating educational videos on working with horses fresh off the track and some issues that their riders tend to run into along the way. Her mission with this trip and her future endeavors is to bring OTTBs onto the media map. “If I have saved one horse by seeing this pilgrimage through, then I am happy. That is what this trip is all about.”

The equestrian community was cheering Valerie and Peter on — both on location and from afar — as they rode into the Middleburg Training Center in Middleburg, Virginia and took a victory gallop around the track. It is safe to say that Valerie has accomplished her childhood goal of making this cross country trek a reality, and she has brought a wealth of education on what these amazing horses are able to do.

To see what Valerie has planned next or to donate her cause, you can visit her Facebook Page, 2nd Makes Thru Starting Gates.