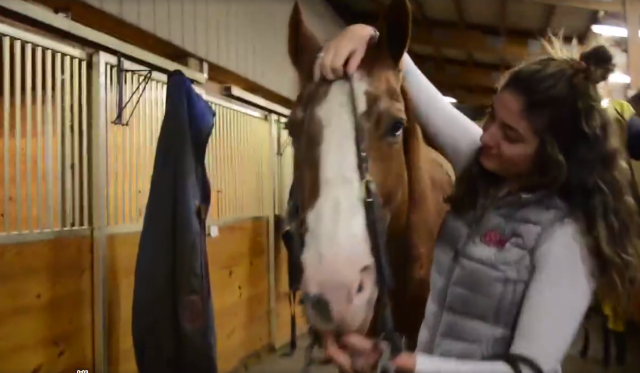 For those of us who can’t even get their horses to stand still at the mounting block, this is beyond impressive. We spoke with team coach Tiffany Hajdasz to get the backstory!

The Sacred Heart University (SHU) equestrian team’s #MannequinChallenge video has been viewed over 1.2 million times since it was first released on November 13, reaching true “viral video” status. The Mannequin Challenge, for anyone unfamiliar with the latest social media craze, challenges participants to freeze in the middle of an action as though they were mannequins, and then videotape the scene, often with Rae Stremmurd’s “Black Beatles” as soundtrack.

Adding a whole new dimension of challenge, the SHU equestrian team decided to give the Mannequin Challenge a go … in the barn, with horses and dogs. If you thought you had a hard time getting your horse to stand still for just a photograph, check out this production.

Equus Film Festival, we hope you’re watching, because that was a heroic Oscar performance if we ever saw one by all parties involved.

To learn more about the team, we caught up with Sacred Heart’s coach Tiffany Hajdasz to learn more. Sacred Heart University is located in Fairfield, Connecticut and the equestrian team trains out of Rolling M Ranch in Southbury, owned by Tami and Garry McAllister. While SHU athletics compete NCAA Division I, the equestrian team competes in the Intercollegiate Horse Shows Association, or IHSA, format, with 28 student-athletes ranging from beginner to open riders in both hunt seat and western.

“We were brainstorming at our team meeting on Wednesday for ways to increase traffic on our Facebook and Twitter pages,” Hajdasz told HN. “Junior Lauren Mahoney brought the suggestion up and the team loved the idea.”

“The team we have now is special,” Hajdasz described. “There isn’t a divide between the classes or the squads as we have seen in the past. They want to work hard and they have tremendous dedication and commitment to the team.”

And how has the team’s fifteen minutes of fame affected that teamwork?

“The video has been a team effort since its inception,” Hajdasz answered. “More important than the number of views is that they worked together on the project. Everyone on the team played a significant role in its success: from the person with the idea, to the videographer, to sharing the link with friends and family. From the experience, they learned that every teammate’s contribution was as important as their own and together they were able to accomplish more than they would have by themselves. That concept is what will make them stronger as a team and will serve them for years to come. They are proud of each other and proud of the exposure they have earned for the team.”

The team that mannequins together stays together, and we hope wins together as well — best of luck to the Sacred Heart University Equestrian Team, and well done on this video masterpiece!

Follow SHU Equestrian on Facebook to stay in the loop… who knows what they’ll come up with next.