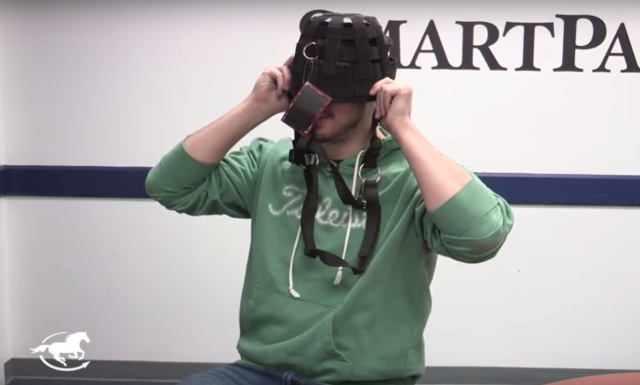 “That’s wrong, unfortunately.” Some moments during the filming of SmartPak’s “Ask a Non-Rider” series are too good not to share: watch SmartPaker Brandan grapple with a grazing muzzle in today’s video.

The non-riding employees of SmartPak are officially Horse Nation heroes for their good humor in trying to figure out just what some of this “horse stuff” is used for — and for allowing that process of discovery to be filmed and then shared with the public. SmartPak has put together the video series “Ask a Non-Rider” to document the often-hilarious guesses by the office non-riders as they struggle to identify a bunch of items from the catalog. (Truthfully, my fellow equestrians, we have a lot of weird stuff.)

Some of these journeys of discovery are simply too good to be edited into the normal compilation video, and when such moments occur SmartPak graciously shares them with us. Case in point: Brandan and the grazing muzzle.

Brandan, thank you for playing. You’re an excellent sport.

Catch the rest of SmartPak’s “Ask a Non-Rider” series by clicking here to open the playlist!