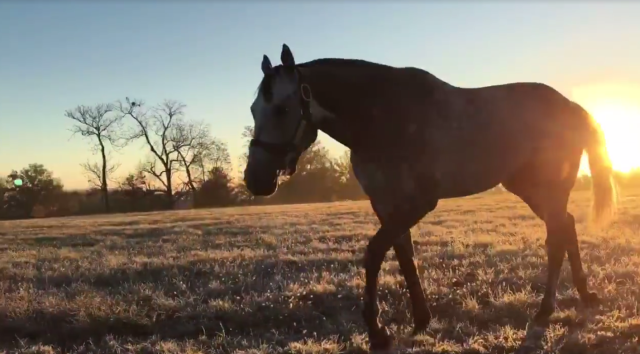 Four-year-old racehorse Frosted has officially retired, and if this video is any indicator he is loving the retiree life!

Frosted officially retired to stud after last week’s Breeders’ Cup, where he finished a distant sixth behind dueling headliners Arrogate and California Chrome. Set to debut as a breeding stallion for the 2017 season, Frosted has moved to Darley’s Kentucky base of operations at Jonabell Farm.

And it looks like he is loving the relative liberty of the letting-down life. Watch Frosted romp in his frosty paddock, enjoying turnout!

Happy retirement, Frosted! Thanks for the great racing memories: Frosted’s most memorable win came in the Grade I Metropolitan Mile, but he also captured the Grade I Whitney Stakes as well as the Grade I Wood Memorial as a three-year-old. He finished second in the Belmont Stakes behind American Pharoah.

As the highest-earning US-based son of Tapit, we’re sure Frosted will have a full book in coming seasons!