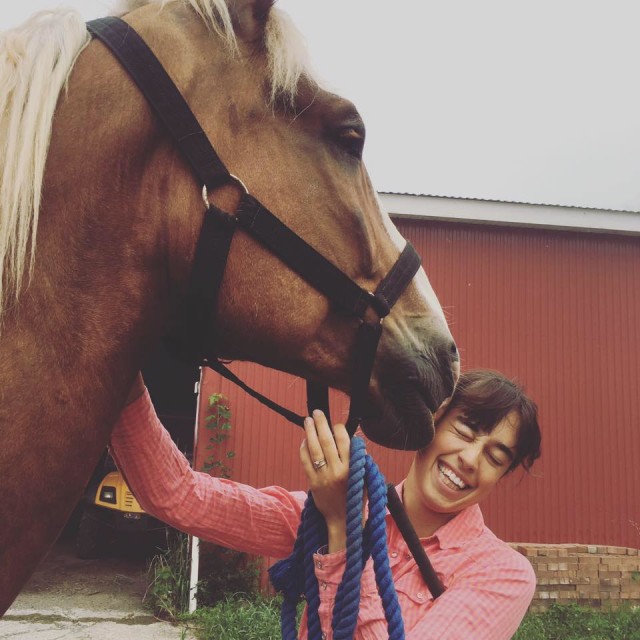 I’m hovering somewhere around the five-month mark since adopting my old teaching partners Rocky and Randy and bringing them to their forever home here on the family farm where they’ll live out the rest of their years. It’s been quite a journey already, and I’m looking forward to plenty more adventures in our future.

That said, in these five months I’ve discovered a whole slew of #DraftHorseProblems unique to these large feathered friends. Here are a few of my favorites. Have your own to add? Shout out to me on Twitter and Instagram with the #DraftHorseProblems hashtag!

1. Everything I buy needs to be bought in duplicate. Like, EVERYTHING. Need new shoes? You’re paying for trims and resets on eight, not four. Need sheets for the winter? Congratulations, you actually need two sheets. Two coolers. Two new halters. New harness… for two. If you own just one draft horse and you’re thinking you have a lot of expenses, consider the needs of a full team. Not actually being experienced in the rearing of children, I imagine this is the kind of fear that parents of twins experience when they think about paying for everything in life.

2. All of those things in duplicate come in gigantic sizes. I’ll go ahead and state for the record that Rocky and Randy both wear an 87, if any high-rolling reader wants to send us a holiday present. Okay, so their stuff is big — which requires bigger totes to store it in, bigger hooks on which to hang halters and harness, bigger and heavier boxes for my long-suffering UPS man to heave onto my porch every other week when I’ve ordered something new. Perhaps bigger is better. I don’t know yet.

3. Those giant horses don’t necessarily fit in the places you think they will. Oh yes, they’re just snuggly wittle draft horses that love hugs when they’re outside and then suddenly their noggins are pretty much scraping the ceiling when they come inside. Our old horse barn used to house Haflingers, carefully bred, raised and cherished by my grandfather-in-law… which is a great piece of history but also means that the barn was built accordingly with ceiling heights to match. Pro tip: your lightbulbs will need cages.

Conversely, draft horses also fit into small spaces you’re sure they won’t, which leads to a whole other set of problems.

4. They’re always Clydesdales. Actually, they’re Belgians, but thanks to the Kleenex of the draft horse world, the Budweiser Clydesdales, Rocky and Randy will forever be called Clydes by well-intended observers who love to pet their big soft noses when we’re doing a special event at the farm stand or out in public. Truthfully, I don’t mind explaining to the public the origins of the Belgian breed and why they’re common to find on American farms, nor do I begrudge the Budwesier horses their role of ambassador for all of us draft horse enthusiasts in the world. But it does make me laugh when someone points and says “look at the beautiful Clydesdales!”

5. They are super lightweights when it comes to drugs. Okay, perhaps this is just Randy, and not all draft horses, but it will never not be funny to see woozy Randy all goofy when he’s sedated for various procedures — first, the surgical removal of squamous cell carcinoma in June, and most recently a routine floating for his big draft horse teeth. Randy is now fairly notorious for acting super-awake when the procedure is going on, with all of the drugs apparently kicking in once we’re done. During the eye surgery, we actually needed to help prop him up so he didn’t wobble right over while he was still thinking about trying to knock the vet down. Thanks, Randy.

6. They can’t go anywhere without each other… sometimes. If I want to bring one or the other into the barn to do something quick and routine, I’d better plan to bring in both of them because the one in the barn will be shimmying around worriedly while the one still out in the pasture is trotting the fenceline like an elephant screaming his head off. And then when I want to bring them both in to harness up and go for a drive and catch just one of them, they become mysteriously independent animals who don’t seem to be at all concerned that their partner is leaving the pasture. Go figure.