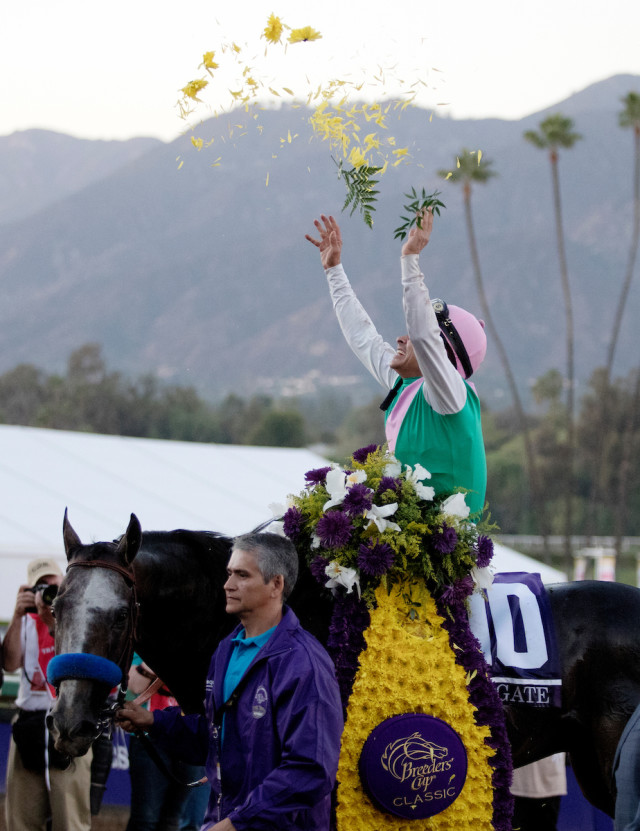 The Breeders’ Cup ran on Friday and Saturday of last week, November 4 and 5, at Santa Anita Park in California. The world’s top horses from three continents gathered to duel over dirt and turf in a variety of age and gender contests which crowned champions over thirteen Grade I races offering a minimum purse of $1 million, all the way up to the $6 million Classic.

So when you win one, earning a spot in history for yourself, your horse and all of its connections, you’re pretty happy about it. Here are the twelve of the thirteen winning jockeys and their brilliant reactions, courtesy of the Breeders’ Cup gallery.

Gary Stevens and Beholder after a photo finish victory in the Longines Distaff, one of the most emotional victories of the Breeders’ Cup. Beholder is owned by Spendthirft Farms and trained by Richard Mandella. Eclipse Sportswire/Breeders’ Cup Photos ©

Flavien Prat rocks the double-fist-pump after winning the Turf Sprint with Obviously. Obviously is owned by Anthony Fanticola and Joseph Scardino and trained by Phil D’Amato. Eclipse Sportswire/Breeders’ Cup Photos ©

Joel Rosario looks thrilled with his victory aboard Tourist in the Mile. Tourist is owned by WinStar Farm, Wachtel Stable and Gary Barber and trained by Bill Mott. Eclipse Sportswire/Breeders’ Cup Photos ©