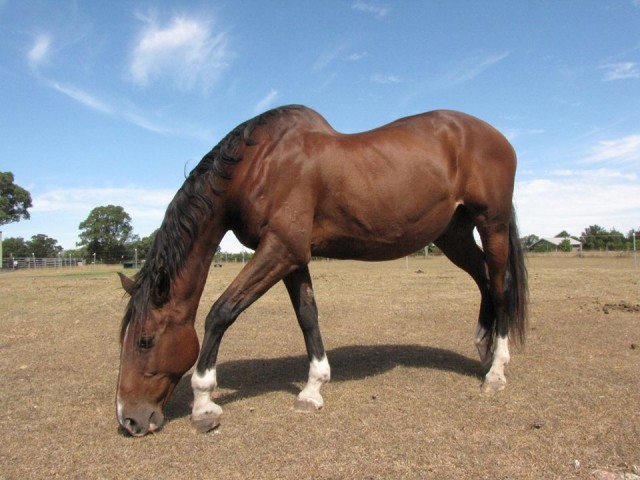 Reader Alyssa Knee shares the details of an unusual equine condition called lordosis, how it affects horses such as her own warmblood Spike and considerations for working with these horses.

In 2011 I purchased my fourth horse; I hadn’t been “in the market” for another horse at the time but there was something about this horse that made me want to purchase him.

I am sure that for many of us our horse stories start this way. We hear about a horse for sale, we don’t want or even need the horse but for some reason we end up with them anyway. This story is not rare. This horse, however, is.

Spike is a 13 year old Warmblood gelding who has a condition called lordosis. When I purchased him I knew very little about the condition I was understandably very shocked when he was delivered to us. I had never seen a back like his and wondered what this abnormal conformation would mean for him.

I wanted to do the best for this new life that had come in to mine and so I set out to do some research on the condition. Here is what I learned.

What is lordosis and how do horses get it?

Equine lordosis, which is more commonly known as swayback, is recognized by a swaying of the back of the horses that are affected. While it is common in older horses and broodmares due to slackening of the supporting structures of the spine, it can also affect younger horses and in these instances the condition is due to an abnormality of the thoracic vertebrae that occurs in utero.

The American Saddlebred Horse Association has been funding research into equine lordosis to learn more about what exactly causes the condition how horses acquire it. They found that lordosis is a genetic fault, where one or two thoracic vertebrae at the withers are wedge-shaped, rather than the normal square block shape they usually are. It is these malformed vertebrae that are responsible for causing the swayed appearance of the horses back.

The ASHA are also getting closer to isolating the gene responsible for causing lordosis. In a recent study, entire genomes of 20 affected and 20 unaffected horses were analyzed and one genetic marker was found to be significantly associated with the presence of swayback. This suggested that a region on chromosome 20 possessed a gene that could cause inheritance.

The results of this study suggest that a major gene is involved and while a genetic marker unique to swayback was not identified the results have  suggested that the condition is passed on via a recessive mode of inheritance; meaning that two copies of the gene responsible for the condition are needed for the offspring to be affected.

How does lordosis affect the horses that have the condition?

In 2010, Dr Patrick Gallagher completed a study on ‘Genetics of swayback in American Saddlebred Horses’ and his study made some important points on the effects of lordosis on the horses that have the condition.

Dr Gallagher recorded that the spine of a lordotic horse followed a smooth curved path. He noted that with horses, the smooth flow of the deformed vertebrae, fixed firmly in place by the strong vertebral attachments, appears to protect the spinal cord from harm and swaybacked horses from serious consequences. Gallagher said, “The comparatively extreme rigidity of the horses’ spines might protect them from the major disabilities and life-threatening conditions experienced by species with more flexible spines”.

The study also identified that swayback horses have not been routinely identified as experiencing pain, and some horses with this trait have performed well in their chosen disciplines. Dr Gallagher noted that performance horses were not impaired to any significant degree by lordosis, but did record that swaybacked racehorses aren’t among the fastest and suggested that horses with the condition may have slightly altered gaits.

In addition, Dr Gallagher noted that lordosis doesn’t have any particular effect on health or soundness. “One of the unique characteristics of lordosis in horses is that the spinal deviation does not have a disabling effect. Even the most severely affected individuals can be trained and ridden and can participate in horse shows.”

What are the major issues for horses with lordosis?

The major area of concern for a horse with lordosis is saddle fit, as saddles will bridge on horses with sways. Bridging occurs when the panels of the saddle don’t make even contact along the horses back causing the pressure to be placed at the front and back of the saddle (on the wither and the loins). An ill-fitting saddle can not only cause discomfort for the horse but can also cause injury.

For horses with lordosis it is important to ensure they are assessed by a saddle fitter so appropriate measures can be taken prior to riding. There are several options available to horses with lordosis including custom making a saddle to fit the sway of the horse, packing the panels of a saddle to ensure that they make even contact with the back or using special pads/shims to build up the area where the bridging occurs.

Alyssa Knee is an Australian-based amateur equestrian, blogger and author. She shares her passion for everything equine and provides a look at the life of her Lordotic warmblood gelding, Spike, on her equestrian lifestyle blog Brunette in Breeches.