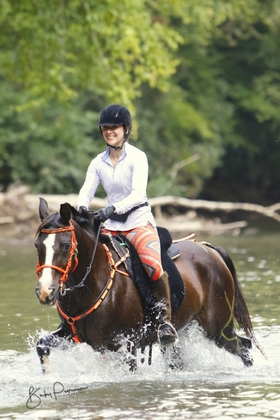 Austen Gage chronicles her partnership with her OTTB “Guinness” at her blog Guinness On Tap, where readers can typically find the pair working on dressage. In August, however, Austen got the opportunity to try something a little different — and graciously shared the story with Horse Nation in a two-part series.

The whole adventure started innocently enough. “Would you be interested in riding Q in an endurance ride in August?” Liz asked.

… and so I had agreed. Though, I honestly wasn’t sure to what.

This, apparently. In all of its utter glory.
Photo by Becky Pearman, used with permission.

A month before the event, Liz started sending me prep info: an email from the ride organizer detailing the trail conditions (read: tough), suggestions of what to pack for 3 nights of moderately primitive camping (note: food, also blankets), things she needed me to bring (mainly: stirrups), and idea of what to wear for the ride itself (suggestion: crocs?! That’s a thing?!).

It was at this point that I began to panic. The last time I went camping was in the Boundary Waters, which is full on primitive camping. I had some sort of idea in my head that we’d show up and be camping BWACA style, then riding forever. In my horror, I left all my packing until 9:30pm the night before I left. I’m honestly surprised I remembered to pack pants. (Aside, thank god I remembered pants.)

Imagine my joy when I rolled into camp and spotted campers, with generators, and porta-potties. Though a far cry from the luxury of your average dressage show, maybe we wouldn’t totally die.

Look at those porta potties in all of their glory. They even had toilet paper most of the long weekend. Also, that horse on the right is tied with a collar. My inner pony clubber started screaming immediately. I shut her up with tequila.
Photo by Austen Gage.

This motley crew definitely shows the wide variety of horse breeds and sizes!
Photo by Dom’s Mike, via Facebook.

This is Q. She’s a Morgan/Arab mare of dubious background that Liz has turned into one hell of an endurance horse. Liz and Q finished the Old Dominion 100 in June, something I’m still pretty much in awe of. On top of being a BA endurance mare, Q is one hell of a good looking little horse!
Photo by Liz.

Actually, Q is a total sweetheart and put up with our shenanigans with grace. We eventually put the horses away and headed towards bed… three huskies in tow.

Sonka, Kenai, and Lyra. We had a very recognizable camp of pointy-eared howling things.
Photo by Austen Gage.

The next morning, we saddled up before the heat struck and headed out to get acquainted with the trail. I decided to let my dog Lyra tag along on the trail, as we were planning to go only six miles or so. Both horses have been ridden around Liz’s dog Kenai plenty, so I assumed this would be fine. And it sort of was…

Liz has talked a lot about Q’s violent spooking, but I think she’s maybe under-represented the action. Q doesn’t so much spook as teleport. One minute we were standing just in front of a puddle, and the next Q is four feet to the right, standing on my ankle. Meanwhile, I’m fully submerged in a deep caramel-colored mud puddle, dress boots, breeches, belt, helmet and all. We think she spooked at Lyra, but I’m still not entirely sure what happened. Thankfully I didn’t hit my head!

Luckily, the mud was very soft. Once I beat Q off my leg, I quickly realized that:

1. The leg was not really hurt, just really deeply bruised.
2. I had mud IN MY EYE.
3. I would need to wash off before getting in the saddle.

So, we turned around on the trail and walked until we found a spot where I could walk down to the river. I dove in head first, complete with boots and helmet to wash the mud from everything. I managed to climb back in the saddle, and we were on our way, with no more spooks.

That afternoon we did vet checks with all the horses set to compete out of our camp, and set them all up with their numbers. The vetting process was fascinating. While vetting Shiloh, the oldest horse of our group at 24, I learned that endurance is a zero tolerance sport. Whereas dressage, and many of the other USEF sanctioned events allow small amounts of NSAIDS and antibiotics to show in drug tests, the AERC doesn’t allow anything to show. Even topical antibiotic creams are outlawed, and horses are watched like hawks to ensure they eat nothing illegal. Having worked shows with USEF testing, and showed under USEF drug rules for years, I was amazed at how stringent AERC rules were.

Painting a number on Shiloh. Trying desperately to fit in by wearing florescent orange.
Photo by Liz.

After dinner, we settled back to camp to await the next day… and the race.

Austen’s endurance adventure will continue in Part II to be revealed next week! Stick around to read her take on the race itself.

Austen Gage is a bronze medal dressage rider, schooling 4th level with her long time partner, a creaky and ancient OTTB. She promises to someday retire him from this fancy prancing sport, so he can spend his days galloping instead of collecting.