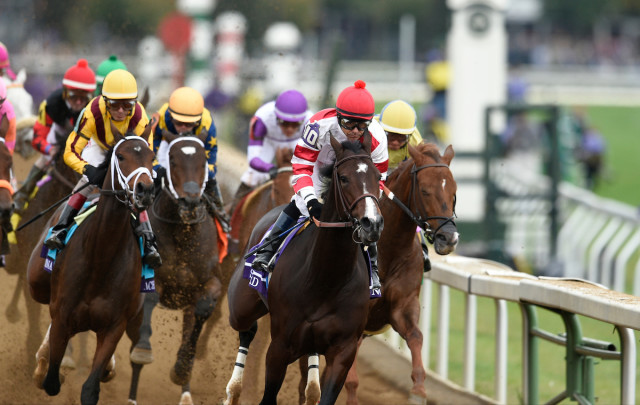 I’ve come to terms with the fact that I’m not a horse racing expert. I’m not a handicapper, I can’t recite pedigrees or tell you all about outcrosses or dosage or recite jockey stats. I just like horse racing, and I know just enough about it to know I don’t know that much at all (but I’m learning more every day). And I’m willing to bet that a lot of our readers who also like horse racing are pretty much in the same boat. So I’m inviting you all to watch the thirteen races of the Breeders’ Cup with me, share your predictions and enjoy the highlight of the North American racing season this weekend.

Let’s take a look at today’s Breeders’ Cup card! A livestream is available at BreedersCup.com, and NBC Sports will also have televised coverage this afternoon.

Juvenile races can be kind of a crapshoot, in my opinion, as these youngsters are maturing and learning almost every start. The current favorite is Oscar Performance at 4-1; he’s run strong races and won his last two starts in good form as well as beaten other entries in this field (J.S. Choice and alternate Kitten’s Cat). Good Samaritan at 9-2 is another to watch also coming off of some impressive wins.

Truthfully, this field in particular strikes me as having a lot of interesting picks; Intelligence Cross has shipped in after winning in Ireland (though he hasn’t gone as far as a mile). Keep Quiet seems to be at the peak of form coming off a win back East. That said, my official pick is Made You Look: he should be plenty fresh with his last race in August, which was a win over the routing distance of a mile and a sixteenth.

Post-race thoughts: That first turn certainly fell apart for the back half of the field and the big wall of horses certainly seemed to throw off a lot of runners, especially the European contingent. Oscar Performance shook clear at the final turn and ran away with it, though I’ll give plenty of credit to Lancaster Bomber and Good Samaritan for their heart-stopping drive to the wire, too late to catch the new Juvenile Turf Champion. My pick Made You Look just buried himself in the middle of the pack and never posed a threat.

This is kind of a “Classic lite” in some respects with some entries perhaps seeking a slightly lighter field than the star-studded Classic. Regardless, this should be a great race: it’s tough to bet against Dortmund, who is currently at 6-5. Poor Dortmund has had a tough year, squaring off against the apparently-unbeatable California Chrome in all of his 2016 starts. Dortmund is a monster — he’s just a big horse and he’s impressive to watch run.

Runhappy, last year’s Breeders’ Cup Sprint champion, is expected to set a fast pace, which could potentially get Dortmund into a little trouble. Runhappy hasn’t done well around two turns, however, so the mile may be a bit of a stretch for him.

While my head says Dortmund, my heart says Gun Runner — frankly, I don’t have a good reason to think this colt will actually get ahead of Dortmund but I think he’s run a solid three-year-old season and deserves a moment in the spotlight after being overshined by a series of other colts whose stars rose at various times of the year. This year’s three-year-old crop has not had a standout star so I’d love to see Gun Runner get his hat into the ring for top honors.

Post-race thoughts: The race played out as the handicappers predicted for the first half, and then I was sure my boy Gun Runner was finally going to get his place in the sun — he and Dortmund steamrollered over Runhappy together and then Gun Runner crept by so smoothly. And then Tamarkuz fired and came blazing right up the center of the track for a great and decisive finish. And my guy Gun Runner is second fiddle again. Disappointing race for Dortmund!

Back to the juveniles, and back to the turf — I think it’s hard to bet against European-bred horses as Europe runs almost exclusively over turf, and this field is full of imports. Roly Poly is the favorite at 4-1 with her previous starts all in Great Britain and Ireland, followed by the French filly Spain Burg at 5-1. Roly Poly comes off of two second-place finishes but she’s run gamely every time out. Victory to Victory is a late scratch.

I like Irish-bred Intricately to win; she’s a very consistent runner who has improved each time out. I’m really looking forward to this race, truthfully, as there are quite a few fillies that look like strong candidates.

Post-race thoughts: Save for some coming unglued on the parade to the gate, the ladies seemed to handle the track much better than the colts earlier. Lull set quite a pace, totally alone for the first three-quarters of the race. Despite plenty of depth from the European turf contingent, US-bred New Money Honey got up in the stretch to grab the win! And obviously I cannot pick them, at least today.

No matter who you pick, this is going to be a heck of a race: I don’t think we’ve actually seen how fast Songbird can go this year as I don’t think she’s been truly challenged. She’s won with Mike Smith under hand rides all over the East Coast. Beholder has been a noted warhorse, claiming prize after prize in fighting form, but (and I’ll probably catch all sorts of flak for this but I’ll say it anyway) I think her star has set and her best days on the track may be behind her. I’ll gladly eat my words if the five-year-old roars back like the monster we’ve seen in the past.

Both Beholder and Stellar Wind should seriously challenge Songbird: Stellar Wind has bested Beholder in their last two match-ups and comes into the Distaff ready for battle.

This is going to be the race of the Breeders’ Cup.

Post-race thoughts: Well, I didn’t call the race, but I did call that it would be THE race. Wow. You can’t script a race like that. Beholder and Songbird battling all the way to the wire, Beholder winning it on the photo, Gary Stevens in tears… what a great final swan song for Beholder who will now retire as a most accomplished six-year-old. Songbird’s undefeated streak is broken but what a way to break it — no shame in such a race against a champion like Beholder.

Update 8:45 PM EST: Unfortunately, the great Distaff is marred by the injuries and subsequent euthanasia of Argentinean mare Corona Del Inca, who was pulled up at the top of the stretch. She suffered a lateral condylar fracture of her right foreleg, a sesamoid fracture and fracture of the first pastern bone. Our condolences go to this mare’s connections.