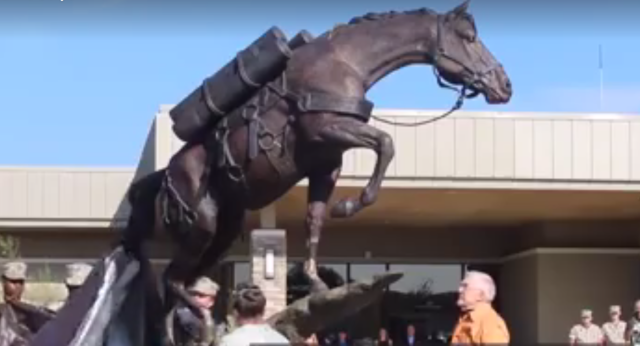 Sergeant Reckless held official United States military ranking and served in the Korean War — and now a memorial stands to honor her service.

One of the most fascinating war horse stories in history, Sergeant Reckless served in the Recoilless Rifle Platoon of the 5th Marine Regiment in the Korean War. She was purchased from a racetrack in Seoul and trained to perform a number of commands, such as lying down when under fire and running to a bunker at the cry of “incoming!” Her most famous action, of course, was carrying ammunition to soldiers in her platoon during battle.

Sgt. Reckless’ biggest accomplishment was making 51 solo trips in a single day during the Battle of Vegas Hill, carrying a total of 9,000 pounds over a total of 35 miles. Reckless only needed to be led a few times on each of her routes; she learned where she was supposed to go quickly and was able to work unattended.

Reckless was highly decorated, with her various honors including two Purple Hearts for being wounded twice and numerous others. On October 26, 2016, a new memorial sculpture was revealed at Camp Pendleton.

Reckless enjoyed a retirement at Camp Pendleton after a public campaign worked to bring her to the United States. She died in 1968 but her memory lives on through her memorial at Camp Pendleton and a similar memorial in Semper Fidelis Memorial Park at the National Museum of the Marine Corps.