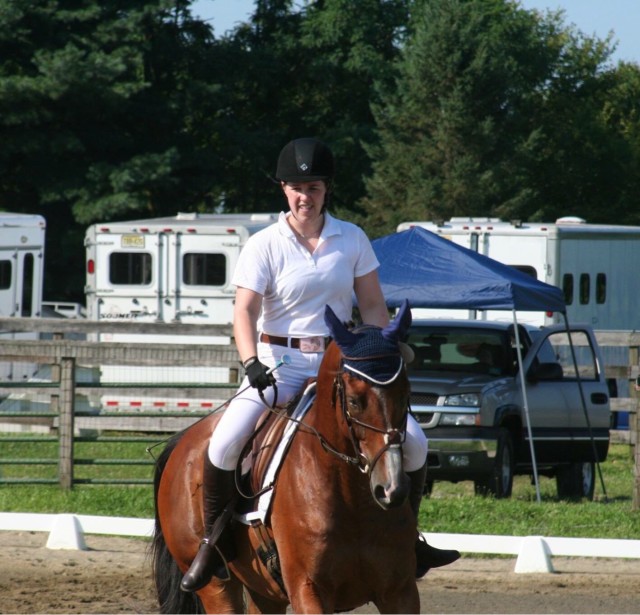 Or, that time “sacrifices” turned into “running the Philly Half Marathon.”

I make a lot of sacrifices to own a horse. It feels weird to write sacrifices because honestly when the trade off is Runkle I’m not really giving anything up.

The time and money I shrug off, because what would I be doing anyway? And this makes me happy. But I finally found the line where it’s turned into sacrifice.

I’ve stated many times, to many people, for many occasions, that I am not a runner. I love lifting A LOT. Riding is great. Usually I do some kind of adult rec league (I’ve dabbled in flag football, floor hockey, and rugby). But with the exception of one short stint when I was depressed because my horse was dead I didn’t run. Ever.

This winter as my jump lessons progressed it became increasingly obvious that I was not fit enough to ride this horse. Over a course of four jumps I would be out of breath, panting, legs sore and shaking from trying to stay with him as he figured out what to do with himself over jumps. And that ranged from not jumping the jump at all to catapulting 18 feet over a 2’6″ oxer. I compensated by bracing my hands on his neck and jacking up my stirrups so short that I could just hold on with me knees. Basically I cheated.

But I really wanted to compete this summer, and I realized it was totally unfair to ask him to do this stuff if I wasn’t in good enough shape to be right there with him every step of the way. So I did what any normal person would do in a situation like this, I signed up for the Philly Half Marathon.

Let it not be said that I half-ass things. No, I have never run a race before. I have never run more than a mile without stopping. I don’t even like running. So naturally my first race should be over 13 miles. And better yet, they changed the race this year. I’m very intimately familiar with this race. My friend has run the full marathon twice, and I’ve several other friends who have completed the full and the half. It actually goes right past my apartment, and normally I make mulled wine or spiked hot cocoa, sit on my balcony and watch everybody go by at 7am, and then go back to bed.

This year however they changed the course for both the half and the full and instead of a leisurely lope through Center City the stupid half goes through HILLY FAIRMOUNT PARK. I almost cried when I saw the new route. Where was my nice flat streets?? Why did they hate me?? Why was I doing this???

But it was too late, I had already paid my entry fee and I am a cheap little shit so I wasn’t going to back out now. And I had signed up in June, so I had almost five months to go from whiny couch potato to seasoned runner.

I started with this Couch to 5K app. I’m not an expert because I haven’t used a ton, but I’ve used this one twice and it’s fantastic. The intervals step up in a very doable way, and there are fun badges when you hit milestones. Plus there’s a lady that sometimes talks to you saying “good job!” and “you’re doing it, awesome runner!” and when I was having a bad run it was fun to curse her out.

They also have add-ons to the app where you can go to 10K and even 21K (a half!) if you like. I just used the couch to 5K because the one downside of this app is just goes by time and not actual mileage. So if you’re a slow person like me maybe thirty five minutes isn’t enough for you to run three miles.

Once I graduated from the app I Frankensteined one of Hal Higdon’s plans. I wanted a little bit more of a taper than he has built in and I also wanted more mileage during the training. His longest run is 10 miles, the weekend before the race. Mine goes up to 12 but 3 weeks before the race, and the weekend before I do 6. Assuming I live through it, I’ll post my full training plan.

This week was the first official week of actual half marathon training and honestly? I ran 12 miles this week and it wasn’t that bad. And I cannot stress this enough, if I can do it you absolutely can too.

And besides getting a sweet runner bod I’m able to actually keep up with my horse. Which if you asked him, I think he hates, because now I never let up because I’m too tired.