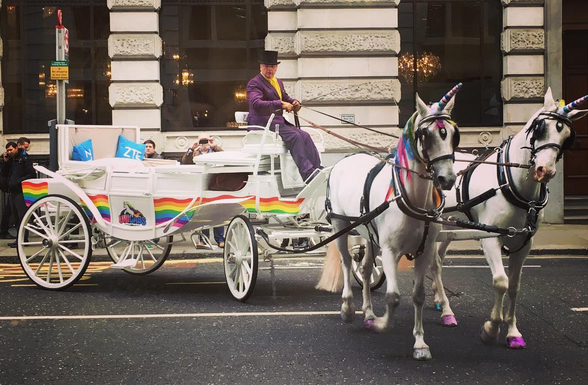 Yes, a lucky few Londoners are catching the “unicab” to work this week — a pair of unicorns are pulling a carriage to taxi passengers around the city through Friday as part of a promotional campaign by the mobile network Three and ZTE.

The carriage are shuttling commuters to and from a few key spots around London; each carriage is outfitted with new ZTE Blade 7 phones as part of the marketing campaign — so you can take plenty of selfies behind the magical white-and-rainbow-hued unicorns. The rides are free of charge, and the carriage seats four so you can travel with your friends.

Friday’s unicab will be waiting outside the Canary Wharf DLR station, so if you happen to be in the area, starting queuing now!

You saw it here on Horse Nation, folks — unicorns are real. Sort of. And go figure, they’ve sold out and gone commercial.

The face you make when all your dreams are being fulfilled ? ? #unicorn #magictogether #peakedtooyoung #whatnext

Thanks to Jacklyn Wyatt for the tip! Go unicorns, and go riding!