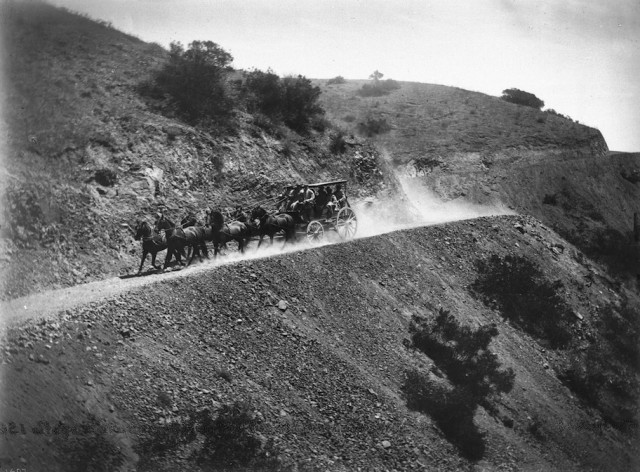 Melanie Eberhardt of Women of Age Riding Horses, or WARHorses, tells the remarkable tale of Charley Parkhurst, a legendarily-tough stagecoach driver of the California frontier — and reveals Charley’s deepest secret.

Originally published at WARHorses in May 2016.

Being a whip (stagecoach driver) in the 1860’s was a harrowing occupation. Days were long, terrain difficult, passengers and horses were a handful to manage. Then there were the occasional hold-ups, gunfights and wild pigs bolting across the road. Being a whip was man’s work and one of the toughest was Charley Parkhurst.

Charley Parkhurst was born 1812 on the east coast and raised in an orphanage. Young Charley ran away and found work at a livery stable. Here he learned how to manage horses, tack and wagons and became a skilled whip. When gold was discovered in California, Charlie was nearly 40 and looking for a change, he decided to move west.

Of average height and weight, Charley was unnoteworthy to look at. He chewed tobacco, drank whiskey and got in more than one bar room brawl. He wore a buffalo coat and cap, always packed a brace of pistols and wore dark blue embroidered gloves. He lost his left eye and dislocated his cheekbone while shoeing a horse. From then on, he wore a black patch earning the moniker “One-eyed Charley”. Charley made a successful career as a whip. The work was hard but so was Charley.

“One time, as Charley braked his stagecoach down Carson Pass, the lead horses stumbled off the road. Charley bit down hard on his two-bit cigar and used all his strength to stop the run-away coach, but the terrain was too rough. The wooden wheels nearly splintered when the stage struck the rocky embankment. A wrenching jolt threw Charley from the rig, but he hung on tight to the reins. The horses dragged Charley along on his stomach, but he managed to steer the frightened horses back onto the road and pull them to a halt. Charley had saved all his passengers and was now a bona fide hero.”

Soon enough the convenience of the railroad forecast the end of stagecoach travel in the American west. Charley retired in 1855. He went on to raise cattle, operated a saloon and worked as a lumberjack. Eventually rheumatism and cancer of the mouth precipitated his death in 1879.

Charley Parkhurst’s life was typical of many men of that decade. Rough individualists with the courage to eke out a living in the rough West. He lived as a public servant, performing duties befit of common folk.

So why feature a post about this fella on WARHorses? Because Charley Parkhurst had a big secret that was only revealed after the mortician arrived to prepare his body for burial.

Turns out, Charley Parkhurst – was a WOMAN!

Charley Parkhurst was born Charlotte Parkhurst! While we will never know her reasons for choosing this unusual life, we can assume it was her love of adventure, outdoors and horses. Charley is the first known woman to register to vote during the 1868 U.S. Presidential elections – 52 years before the 19th amendment granted women the right (though she was registered as a man). As a woman, she would never have been employed as a whip. Charlotte was an incredible equestrian woman who made a successful career disguised in a tough man’s world.