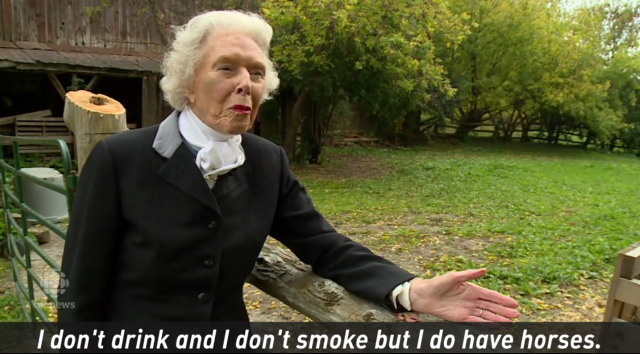 This video made the viral rounds over the weekend, but in case you missed it, here’s your must-see post of the day: Dinnie Greenway of London, Ontario still rides regularly at age 96. She might not be the most flexible or “bounce-able” rider to throw a leg over a horse these days, but to Greenway, age seems to be just a number.

Greenway isn’t just a lifelong horse lover — she was one of Canada’s first female international competitors, traveling the world to show including the 1936 Olympics. She won the first modern show jumping competition at the Toronto Royal Winter Fair in 1949.

Greenway’s broken her neck twice but doesn’t seem to be slowed down at all; she’s survived three husbands and vows now that she likely won’t marry again. She will, however, make plenty of time for her horses.

Dinnie Greenway, you’re a woman after our own hearts, and we at Horse Nation salute you. Go riding!