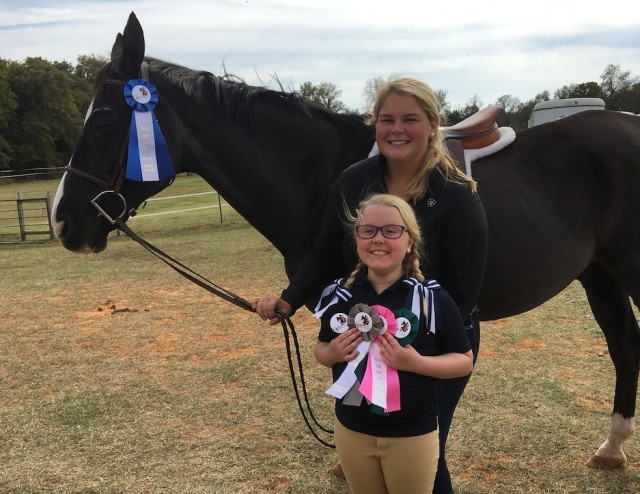 Six horses pulled from a sales holding pen in June were discovered this week to be horses retired out of the Oklahoma State University NCAA equestrian program — but it’s still unclear exactly how they got there.

Annie Specht and a student after a great day showing with their holding pen pull. Photo courtesy of Annie Specht with permission.

The identity of Annie Specht’s new-to-her hunter/jumper gelding came to light early this week, when she posted a video of one of their rounds from a weekend show on her Facebook page. “Someone said ‘hey, that horse looks like so-and-so who was at Oklahoma State,’ and then people started tagging their friends, and we realized it was the same horse.”

Specht had acquired the 16-year-old gelding earlier this year in June and realized that he was wonderfully talented: “He’s a great jumper,” she told Horse Nation. “He’s got his changes. He needs some regular maintenance to keep him going, but frankly I don’t think he’s beatable in the show ring right now.” According to a friend who had ridden the horse at OSU, he had been retired out of the program with a suspensory injury, which Specht believes has fully healed during his time off.

Specht operates a boarding barn and training facility in Oklahoma, working with a local off-track Thoroughbred organization to pull OTTBs and help prepare them for second careers — she doesn’t often do too much pulling from auctions or holding pens.

But in June, a friend visited a holding pen and noticed six horses who appeared to be sound and well-broke. “She called me up the next morning and said ‘we should go look at these horses,’ so I went along with her. I rode all six of them that day and between me and my friend and my connections and trainers, we were able to pull all six. They’re all in safe homes.”

As described by Specht, this holding pen facility ships horses in and out for sale: the ride-able, usable horses are sold or shipped around the country to other sales; the unride-able or unsell-able horses will auction and likely go to foreign slaughter. However, with this set of horses, something seemed different.

“They made it very clear to us when we were looking at these six horses that photos or videos of them could not be posted on the internet,” Specht stated. “They were not advertising these horses for sale, but they made a deal with us that day. All we were told was that they came from a college equestrian program.”

NCAA college equestrian programs thrive on donated horses: owners can donate their show animals to one of many college programs and typically be confident that their horse will receive excellent care and nutrition as well as help another generation of young equestrians further their experience and knowledge. Most donation contracts include a right of first refusal, meaning that if the horse retires or is otherwise unsuitable, the donating owner can choose to be the first person notified to help find the horse a good home.

Oklahoma State University is among the “Big Twelve,” the top twelve ranked Division I equestrian programs in the country, and head coach Larry Sanchez takes great pride in his program. “I’ve been a collegiate coach for 24 years, and I’ve been at OSU for 18,” he told HN. “I am proud of the condition of the horses in my program.”

Sanchez explained to HN that these six horses in question were retired from the OSU equestrian program: “When horses get to the point where they can’t compete at Division I level, if there’s a mental or physical unsoundness issue, we will retire them. We have a 44 acre pasture for retired horses that’s about as safe and comfortable for horses as can be.

“That said, performance horses like ours sometimes do better if they can still have a job to do — if there’s a case where a horse can go on to be a lesson horse, or a kid’s horse or a trail horse, and they’re still sound and safe, we’ll place the horse in such a situation if it’s a good match. I have many alumni who will purchase a retired horse from the program for their own students.”

OSU’s donation contract does offer right of first refusal, Sanchez stated, and it was honored for the six horses in question where applicable. “All of the horses retiring from our program go through the right of first refusal process with their donors — sometimes that’s not possible when the horse is donated.”

Sanchez was still tracking down details on what exactly happened to these six horses in question when HN spoke with him this afternoon, but he described how the horses left OSU: “An individual who I thought was a longtime friend of the program purchased a horse from us a few years ago. The horse was in great shape and received excellent care under his supervision. He reached out to me again looking for some trail and lesson horses, and knowing what good care his first horse from us received we went ahead and looked through our retirees. The six horses were rehomed to this individual on May 27th, 2016.”

Somehow — the details of which are still unclear — these horses wound up not under the care of this individual but in a holding pen at the sales facility by June with instructions not to be listed for sale and not to have photos or videos shared over the internet. Sanchez shared that he is personally devastated that these horses wound up in this situation.

“These horses were not intended to go this route and we will do everything we can to ensure that they are in good care. I was proud of these horses when they left, and I’m doing everything in my power to make it right for them.”

Sanchez declined to share a name or contact information for the individual who took the six horses from OSU.