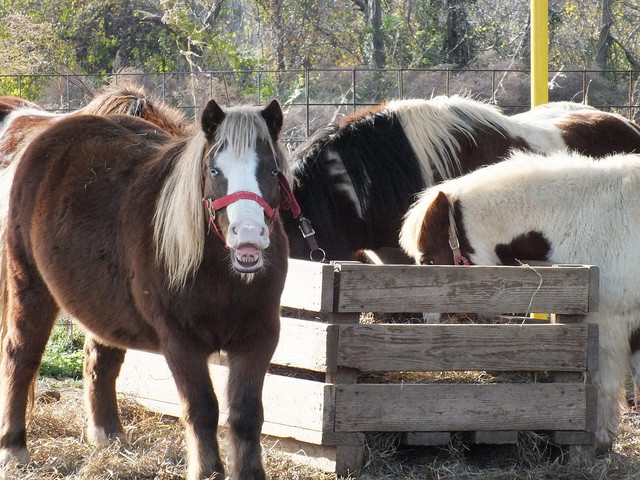 This week’s theme: horses in places they shouldn’t be.

If there’s horse news breaking in the world, you can count on Horse Nation to bring you the headlines you need to know. You can also count on us to bring you the weird headlines you probably didn’t need to know but that we found too weird to pass up. As it turns out, most of the newsworthy horses this week earned their fifteen minutes of fame thanks to that mysterious equine propensity for turning up in places they shouldn’t — and then being unable to help themselves back to where they should be. Oh, horses: never change.

Poor Walter the horse spooked and backed into a levy in Florida where he wound up getting stuck for a few hours until fire rescue crews were able to extricate him. Fortunately his rider was able to bail before he backed all the way into the water, but either the water was much deeper than Walter anticipated or the bottom was mucky as the horse was unable to get himself back out again. The Marion County Fire Rescue Crew with the Marion County Technical Rescue Team were able to get a harness around Walter and pull him to safety. [Florida rescue crews rescue horse stuck in levy]

Do you know where your horse is? Because this one that was running loose for two days until it was finally captured in Dane County, Wisconsin still hasn’t had anyone come forward to claim it. It took 12 volunteers to eventually catch the gelding, but he loaded onto a trailer and is now chilling out at the Dane County Humane Society in Madison, waiting for his owner to claim him. So far, no one has come forward. [Stray horse running loose for 2 days captured, DCHS says]

A family in Virginia was bewildered to find Phoenix the horse looking down at them from the hayloft one evening. Presumably, a spat between pasturemates drove poor Phoenix to seek an escape route and he managed to clamber his way up the stairs into the loft. He wound up spending a night secured in the loft before the Technical Large Animal Rescue Team at the Little Fork Volunteer Fire and Rescue Company in Culpeper County could come to his aid. Phoenix is now recovering from an exciting 24 hours, including a bad reaction to the sedative administered so that he could be pulled from the loft on a glide. [Rescue team saves a horse from the hayloft of a Botetourt County Barn]

A Premier League fan rode his horse into a bar in England to celebrate Burnley’s win over Everton. Because why not? Video shows the horse calmly standing in the middle of the packed and raucous bar while music pumps and revelers stroke his face and neck. While we don’t recommend ever doing this, we have to give credit to both this quiet saint of an animal and the respectful Burnley fans who apparently treated him gently. Yes, go ahead and make the joke — a horse walks into a bar… [Clarets fan rides horse into pub]

Okay, this isn’t about a horse being where it shouldn’t, but a few wild boar. Custodians of the Piste des Reservoirs gallop at Chantilly were distressed to discover that a group of foraging wild boar had torn up the beautiful turf and ruined the training surface. The animals themselves were chased off the track but the gallop had to be temporarily closed so it could be repaired. Such a boar. [Boar war: unwelcome visitors rip up gallop]