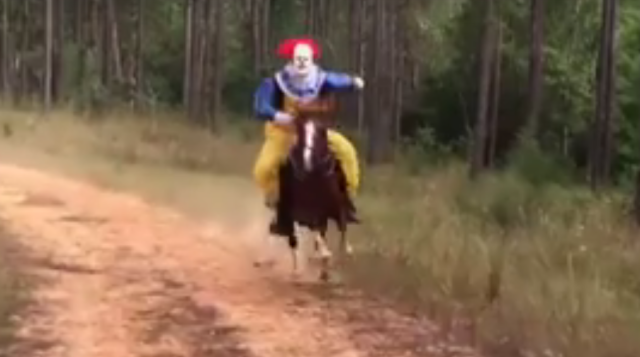 Okay, creepy clown people, you’ve finally succeeded in convincing us that you’re lurking everywhere ready to scare the bejeesus out of us at any given moment — thanks to the creative folks at Gascon Horsemanship (the T-rex and Minion suit guy), it’s safe to assume that nothing is sacred from the clown craze/outbreak/wave of terrifying activity.

In case you need a primer on the “creepy clown” trend that’s been making headlines from the first reported sightings in August to Kemper County, Mississippi enacting a flat-out ban on clown costumes until after Halloween, click here for a little timeline of the social-media-fueled craze that I think we can all safely say has gotten way out of hand.

When you’re ready, click play to watch those wild cowboys at Gascon Horsemanship bring our greatest fear to life: clowns on horseback.

Jeepers. Truly the stuff that nightmares are made of.

In reality, though, we have to give credit to Gascon Horsemanship not only for trying find some humor in this very weird chapter of 2016 but also for training such a lovely horse tolerant of any shenanigans taking place on its back.