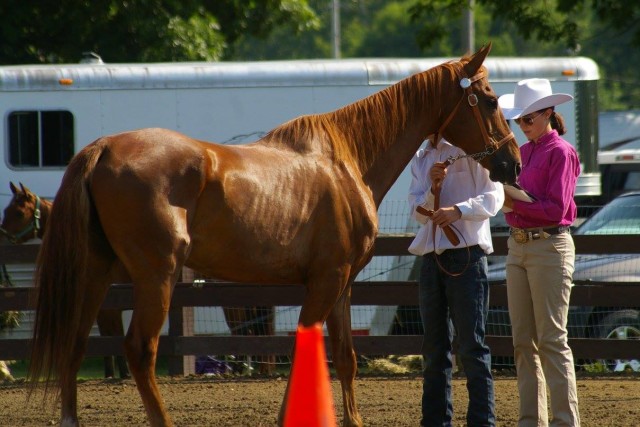 Halfway through her semester of “Judging Horse Shows” (seriously, college classes are SO cool these days), Haley Ruffner is still seeking that confident cool decision-making that all judges possess … don’t they?

Every judge at every horse show I’ve been to has appeared calm, collected, and absolutely confident in their placings. This, I thought, was a quality that came with holding a judge’s card—if you had the authority to stand in the center of the ring with a jacket and a cowboy hat, you would always know exactly what was going on around you.

So when I decided to take a class called Judging Horse Shows, I hoped that someday I, too, could attain the all-knowing, firm demeanor of a horse show judge. After taking the class, maybe I would be able to look at a group of horses and determine which were the best and in what order without much effort.

Naturally, this process is not at all how judging, much less learning to judge, works. In watching a video of a western pleasure class at Congress, I didn’t even manage to get all of the horses’ numbers down before the class was well on its way. Reining runs — one of my favorite things to do and watch — all started to look much the same after a while. I think maybe I gave a plus-half to a stop that looked similar to that one fifteen horses ago? Was that a kick-out that I saw out of the corner of my eye when I looked down to write something?

Never have I been so far out of my element, however, as yesterday when we watched some calf roping, heading, and heeling runs. Every other western discipline I’d at least seen, if not attempted before, but roping was over before I even realized which horse I was supposed to be watching. It was edge-of-your-seat entertainment, but I didn’t have the slightest chance of discerning each minute maneuver unless I had watched it twenty times, and even then it was only a foggy sense of what had made that run better than the ones before it. Differentiating between varying degrees of “WOW, was that a fast run” will likely be above my understanding for at least the next forty-five years.

I’m a long way from being able to do a decent job of judging a horse show, much to my chagrin. When I shared that thought with my professor and coach, Steve Shank, he assured me that all judges make mistakes and that he’s been there, sweating bullets and holding an incomplete score card, in a huge class with older judges who seem to know what’s going on. My biggest takeaway so far has been the importance of preparing for the inevitable—that if I ever judge a horse show, I will miss things, I will get lost, and I will make mistakes. In the meantime, my respect for and admiration of successful judges has increased exponentially.