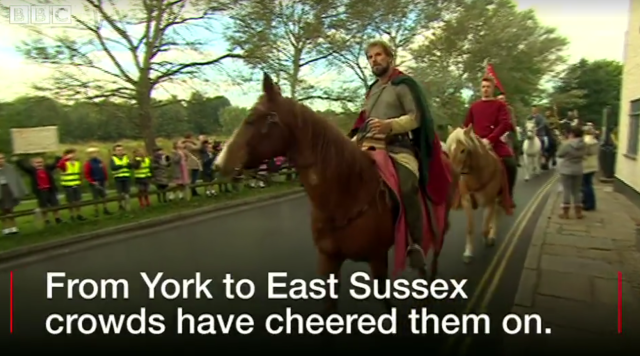 A group of extraordinarily dedicated re-enactors rode or marched over 300 miles in September and October to commemorate the march of England’s King Harold to the Battle of Hastings.

Perhaps one of the single most pivotal moments in English history, the Battle of Hastings was fought on October 14, 1066 between the armies of William of Normandy (more famously known as William the Conqueror) and King Harold Godwinson, king of the Anglo-Saxons. William the Conqueror proved triumphant; King Harold was killed at the battle and William would go on to be crowned King of England.

Marking the 950th anniversary of the battle, a group of dedicated re-enactors traced King Harold’s march from York in northern England to Hastings in East Sussex in the south — a distance of over 300 miles, making for quite the little trail ride!

Only a few high-ranking nobles among King Harold’s forces likely actually rode horses; Harold’s army was reportedly entirely infantry which perhaps led to his defeat against a mixed Norman-French force of infantry, archers and cavalry. Regardless, hearing the clip-clop of hooves coming through town and peeking out the window to see the anachronistic sight of eleventh-century warriors marching down the street clearly gave many residents a thrill!