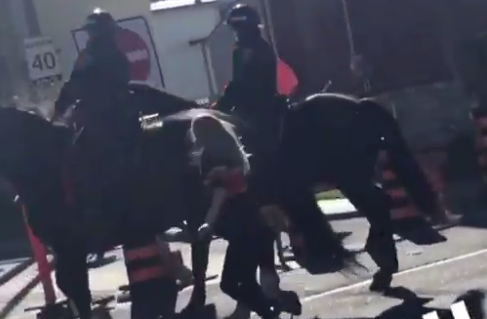 Police horses have got to be some of the most long-suffering, tolerant souls on this planet. Perhaps we could stop drunkenly slapping them please?

A Queen’s University student is just one of many recent morons who felt it necessary to strike a police horse — fortunately, there’s video evidence so we can watch as this poor horse does what we all wish we could do and knocks the girl over with a well-placed kick:

It’s still unclear if this student is among the three students charged with striking Murney, a mare new to the Kingston, Ontario mounted unit. (Yes, you read that right — at least THREE students thought that slapping a police horse was a fun, mature thing to do.)

Police horses serve as valued members of mounted units all over the world: they have proved their worth in riot and crowd control as well as serving as ambassadors of law enforcement in cities and parks as a highly-visible and recognizable branch of the force. While these animals are generally well-trained to handle all sorts of chaos, that’s no excuse for presumably-drunken individuals to treat them like objects to be slapped around. We have no qualms about stating that this young lady got exactly what she deserved.

Sadly, she’s not the only one in recent years to take out some aggression (even in a boisterous, “we’re just college students blowing off steam” kind of way) on police horses: here’s a brief rundown on just a few of the stories.

Fortunately, assault of a police animal is a criminal charge in most states as well as Ontario where the above video was filmed; the three students arrested at Queen’s College could face up to five years in prison as a maximum sentence.

You wouldn’t walk up and strike a police officer and you wouldn’t stroll by and slap a horse in a stable, so why strike a police horse? It’s cruel, it’s childish, it’s dangerous and it’s also a crime. Let’s keep our hands to ourselves, people.