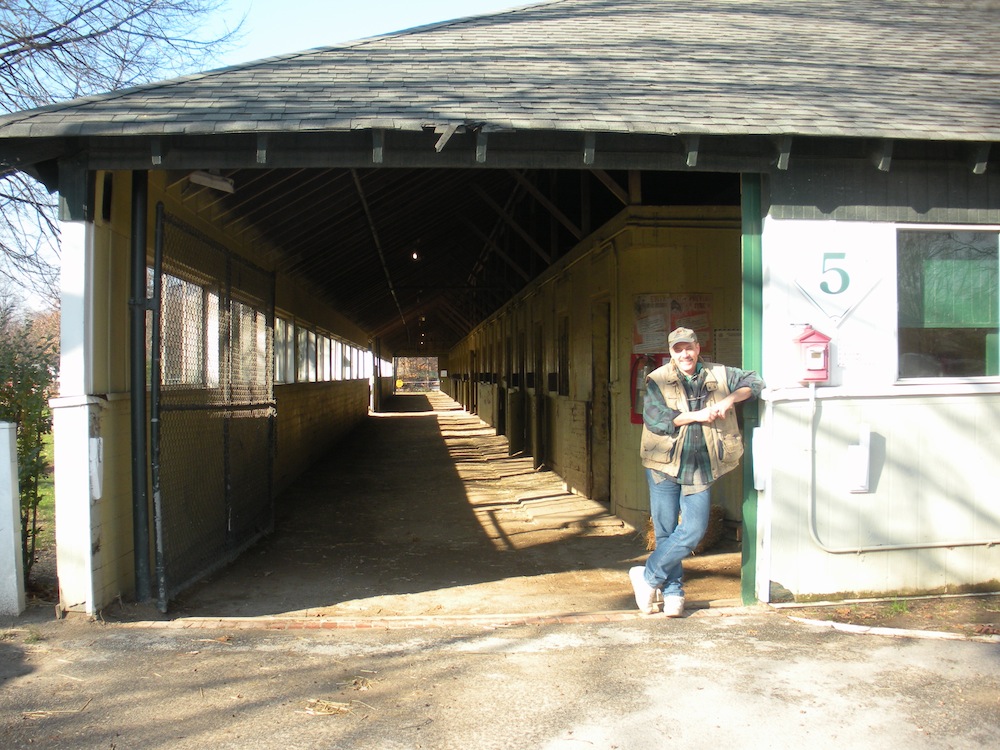 Dr. Gregory Beroza has plenty of tales to tell from a distinguished career in equine veterinary medicine, but his most incredible story is the time he found himself treating none other than Secretariat on Belmont Stakes Day, 1973.

Dr. Gregory Beroza is an accomplished board certified veterinary surgeon, board certified equine practitioner, horse racing analyst, and professional journalist with a treasure trove of stories and rich experiences from his years spent working with horses and horse people. One of those stories includes his pre- and post-race work with Secretariat on the day “Big Red” won his historic Belmont Stakes and captured the 1973 Triple Crown. We spoke with Dr. Beroza to learn more about his experience that day as well as his additional insights on Secretariat.

HN: Hi Dr. Beroza! Welcome to Horse Nation. Tell us a little about yourself, your work, and your ties to Secretariat.

As long as I can remember, I always wanted to be an equine veterinarian, and I always knew that someday I would be working at Belmont Park, NY. My Dad encouraged my equestrian passions because he was a summer camp riding instructor and in college he qualified for the ROTC Horse Drawn Field Artillery. Otherwise, however, I had no other formal equestrian training. Excuse me for so bluntly saying that I was a natural when it came to working around and riding horses. Horses were, still are, and continue to be my passion. I’ve always been consumed with knowing as much about the horse, and its healthcare, as was possible, even to this day.

My formal education and experience is very extensive. I have a medical background from the University of Miami [Florida], a Master’s Degree in nutrition from the University of Florida [Gainesville], a Veterinary Degree from the University of Illinois [DVM], an Internship in Medicine & Surgery from the Illinois Equine Hospital, a Surgical Residency from the University of Pennsylvania at New Bolton Center, one year’s apprenticeship working at Belmont Park for legendary equine surgeon Dr. William O. Reed, three years as an Assistant Professor of Surgery at Tuft’s University Veterinary School, and then I opened my own private full-service equine hospital in New York, the Long Island Equine Medical Center. I continued the use of the original hospital property as home to the US Polo Association’s West Hills Polo Club. Under my regime we proudly hosted a National Arena Polo Championship and several Northeast Regional Arena Polo Championships.

During my early professional years I attained unique dual Board Certification Diplomate status in both Surgery [American College of Veterinary Surgeons] and in Private Practice [American Board of Equine Practitioners]. I’ve held many distinctive job duties such as veterinarian to the Nassau County Mounted Police Unit, work on various animals for the Brookfield Zoo in Chicago, local “On-Call” duties with rodeos, traveling Lipizzaners, the Ringling Brothers Circus and numerous other assignments.

During my career, I’ve worked for an impressive assortment of actors, celebrities, outstanding equestrians, extremely wealthy and not so wealthy horse people, politicians, police, and a few criminals. I’m not a heavy reality TV fan because there is enough of that type of “real stuff” interwoven in my professional career.

HN: I’ve read you assisted Dr. Mark Gerard prior to Secretariat’s historic Belmont Stakes on your HorseDoc blog. Tell us about the atmosphere surrounding his team and in the barn that day.

Of all my exciting equestrian experiences, the most amazing episode was how I ended up working on Secretariat before and after the Belmont Stakes. During the summer of 1973 I took a pre-veterinary summer job working for Dr. Mark Gerard who was a prominent veterinarian at Belmont Park, and essentially considered one of the best in the world. One day he asked me to assist him treating “a horse.”

When we pulled up to Barn 5, there were several guards to whom we had to show our credentials before gaining admission. Without explanation, Dr. Gerard asked me to go catch a horse in Stall 10. I complied without question until I read the shiny brass nameplate on his halter: SECRETARIAT. In utter amazement I hesitated for a brief moment, but then I grabbed Secretariat for Dr. Gerard to administer some pre-race intravenous fluids, to hydrate him. Afterwards, Dr. Gerard gave me a lecture about the values of never being star struck.

Forty-three years later, I have never again seen such a magnificent horse. He was extremely well-muscled, looked powerful, yet was a real gentleman to handle until it became race-time. En route to the track, like other great race horses, he seemed to grow in stature, in size and in competitive temperament. Secretariat, the jovial laid-back barn trainee, on race day turned into what endearingly is called in the racing community “a real freak.” As my good friend, legendary Hall of Fame Jockey Angel Cordero Jr said, “Only once in his early career did I beat Secretariat, and then every race after that I was only able to watch his tail.”

HN: Much has been made of Secretariat’s “perfect” conformation. Tell us how that affected his stride length, rumored at 24 feet, 11 inches in the Preakness.

While Secretariat was a magnificent horse to see, there were many critics at the time questioning if could really win the Belmont Stakes, let alone any of the Triple Crown races. Like the Williams sisters in tennis, Mohamed Ali in boxing and Joe Namath in football, Secretariat was not immediately anointed. He was initially disparaged for having a sloping rump [“duck’s ass”] which critics said would prevent him from performing in the longer distance races such as the Belmont Stakes. Secretariat proved these critics wrong by winning all three Triple Crown Races in historic record-breaking times which are all still unbroken today, some 43 years later. He ran the Belmont with ever increasing distances to win by 31 lengths. His stride was long, but I attribute his win to talent, conditioning, and guts.

HN: After his death in 1989, the necropsy revealed Secretariat had an abnormally large heart estimated to have weighed 22 pounds — two and a half times that of the average horse. What can you tell us about this genetic condition known as the “x-factor,” hypothesized as passed down via the dam?

After Secretariat’s death in 1989 a necropsy revealed his heart was excessively large. While that might have been a contributing factor giving him an advantage, no one knows how many other horses out there have hearts of similar large size that never performed a lick. They were never necropsied. Sometimes excessively large hearts can actually be a disadvantage, and I do not profess to have an expert opinion in this debate. However, not only did Secretariat have the heart of a champion, not just in size, but in spirit. He was a naturally fierce competitor. He didn’t like to get beat!

Genetically, Secretariat had a full brother, as portrayed in the Disney movie, but that horse did nothing spectacular as a race horse. Furthermore, Secretariat’s sire, Bold Ruler, was himself a superstar race horse having won the 1957 Preakness Stakes, 1957 Horse of the Year Honors, and later being inducted into the Racing Hall of Fame. Bold Ruler was also the great-grandsire of another Triple Crown Winner; Seattle Slew [1977].

HN: Secretariat is best known for his daughters. How does the “x-factor” tie in with his legacy as leading broodmare sire in North America?

Similar to his sire Bold Ruler, Secretariat initially became better known as a great broodmare sire. He had a better performance average in turning out good race mares and good broodmares, even if their race records weren’t stellar. Some of this bias has a statistical explanation as relates to the racing industry. If a colt doesn’t race well, he usually doesn’t have a great chance to make it to the breeding shed, let alone be sent outstanding broodmares to breed. However, if a mare has great bloodlines, regardless of her race record, she stands a better chance of someone breeding her to a superior stallion; thereby the genetic odds for success are maintained.

Bold Ruler was a disappointing sire of sires, especially in his early years. Over time, however, he became a more recognized sire of sires; and he produced Secretariat only at the tail end of his life. Many of Secretariat’s daughters produced great racehorses that then became sires. I had the opportunity to work on two of these great Secretariat daughters: Secrettame and Vivasec. Secrettame had a mediocre race record and was purchased by my former veterinary employer Dr. William O. Reed. She was bred to a great sire, Mr. Prospector, and produced another super breeding stallion, Gone West.

HN: You had first hand experience with Secretariat and many other greats, like his rival Sham: what was your impression of these horses and why do you think they became living legends?

I also had the opportunity to work in the barn that housed Sham, trained by the great Pancho Martin. Sham was a magnificent and powerful-looking horse and, many years later, Pancho Martin became a private client of mine. Sham was a nemesis to Secretariat in the magnitude that Alydar continually challenged Affirmed, who eventually won his Triple Crown victory.

It often takes another great athlete to get maximum performance out of an even better one. This is how Joe Frazier pushed Mohamed Ali into some of his greatest winning moments. Their fights were incredible and literally exhausted both boxers. The same is true for Sham pushing Secretariat as the second-place horse in both the Kentucky Derby and Preakness, and Sham finally broke down in the Belmont Stakes trying to keep up with Secretariat. The end result was Secretariat’s still unbeaten race time records in all three Triple Crown Races. Sham’s second place times in both the Kentucky Derby and Preakness Stakes still stand as better than most other Triple Crown race winning times.

HN: Thank you so much, Dr. Beroza, for your insights. Do you have any closing thoughts?

Some 43 years later, I still find Secretariat’s Triple Crown win to surpass every other racing event I ever witnessed. Remember that Secretariat raced in an era before we had the benefit of all of today’s more advanced training and therapeutic modalities, plus most of today’s routinely used medications. Not only did Secretariat save Ms. Penny Tweedy’s [Chenery’s] Meadow Stables, he gave entertainment, inspiration, and hope to a country which was steeped in financial depression at the time. America needed a sports hero, and a “Big Red” horse named Secretariat stepped up to answer the cause.