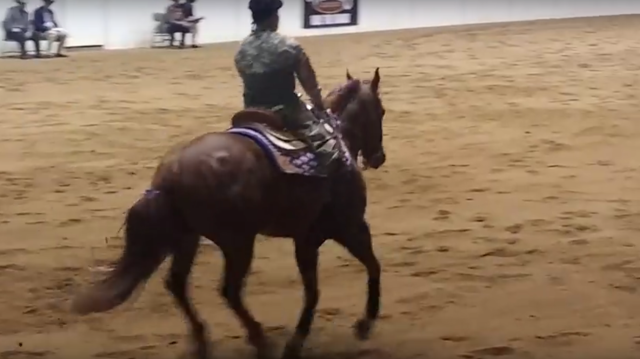 The All-American Quarter Horse Congress’ freestyle reining is always a spectacle to behold — but two performances this year proved to be particularly moving. Check out the videos!

The All-American Quarter Horse Congress, in some respects, represents the principles behind America as a nation: a great melting pot at which all are welcome regardless of background. Nowhere was that concept better illustrated than in the freestyle reining: one of these competitors was born in Australia and the other Burma, but they’ve achieved great success on the back of a Quarter horse at the largest single-breed show in the United States.

Neither of these performances are foot-perfect reining runs, but the spirit and emotion captured in each performance is what sets them apart.

Many Horse Nation readers are likely familiar with Australian Dan James of Double Dan Horsemanship — we’ve featured his unique freestyle/liberty performances plenty of times in the past (click here to see our other pieces). He tied for second place in the Open Freestyle Reining at Congress with this Man From Snowy River-inspired routine — watch all the way through for a few signature Double Dan touches!

Frederick Win’s performance in the Non-pro Freestyle Reining was good enough to win it, capturing the hearts of a full coliseum of fans with a moving tribute to the armed forces. Win was born in Burma with only a partial right leg, but that didn’t stop him from taking up jumping as well as dressage and even competing in dressage at the FEI level. He started riding reining in 2013 and fell in love with the sport.

Win’s freestyle ride pays tribute to the armed forces; members of Win’s family are in the military and he sought to honor their contributions and sacrifices through his performance. It’s clear to see that the crowd appreciated Win’s routine as well, awarding him a standing ovation.

Freestyle reining is meant to tell a story, and both of these riders certainly accomplished narrative performances. Go reining, and go riding!