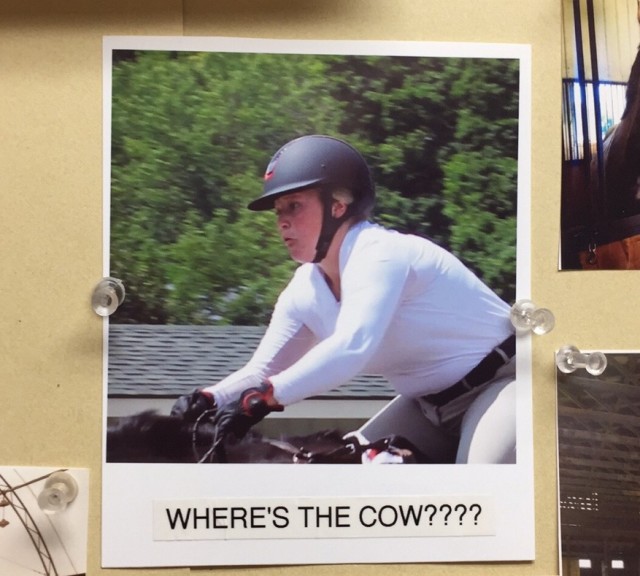 When you have the opportunity to take a reined cow horse class with IHSA coach and AQHA legend Harry Hurd, you don’t turn it down. You may wonder, when you’re waist-deep in a mud pit fixing corral panels to prevent cows escaping onto the highway, whether taking this class was your wisest course of action. You may ask yourself this again when your knee is hooked over the saddle horn and your foot is grazing the back of a cow that your horse is chasing whether you’re on his back or not.

When you somehow find yourself back upright, one leg on each side of the horse, Harry’s laughter ringing through the microphone he’s set up to give instruction through, there’s a sense of pride that even though you did a terrible job, you still did the job, and that’s more than you could say five minutes ago.

However, when my turn was over and one of my classmates rode, I realized that (beyond the incredible amount my riding and effectiveness was improving), this class was absolutely worth the near-death experiences for the pure hilarity that ensued from watching everyone else get knocked off-kilter like I did. One instance in particular stars Ellie Woznica (previously featured in my article on horse showing with non-morning people), who was ecstatic to ride Harry’s strong, fancy cow-horse, BT. No one was allowed to ride him for the first few weeks, and when we finally brought him out, we were equally nervous and excited.

Ellie chose the smallest cow of the bunch, a fluffy thing with baby fuzz still around its ears. She chased it down the fence at a slow trot, and at the end of the pen it stood quietly watching. Harry told her to move up on it because it was a “soft” cow—she did, and all of a sudden it jumped to the side faster than any cow that small should be able to. To her credit, Ellie stayed with BT for the first few turns, but he eventually unseated her. In the panic, she lost a rein and was giggle-screaming as BT continued boxing the cow. Harry managed to stop laughing long enough to say “whoa” over the speakers, low and final, at which BT stopped right away. Ellie reached down to pick up her rein and what was left of her dignity, then let a couple of other riders take a turn.

When her turn came again, she bravely chose the same little cow in hopes of “teaching it a lesson.” They did the same dance as before—sprightly trot down the side of the arena, stop and stand, then jump back and forth in an attempt to get past the catty BT. This time, Ellie sat deep in preparation for his hard stop—but forgot to prepare for the ensuing turn. BT, in sync with his cow, jumped right out from under Ellie, who threw her reins and swan-dove, belly-laughing as she flew through the air, to land on her backside in the deep arena sand. Like Ellie, I was sore the next day, but my pain originated from laughing myself a six-pack of abs.

In true Harry Hurd fashion, Ellie’s picture appeared on the barn bulletin board in a place of honor the following week, complete with a fitting caption.