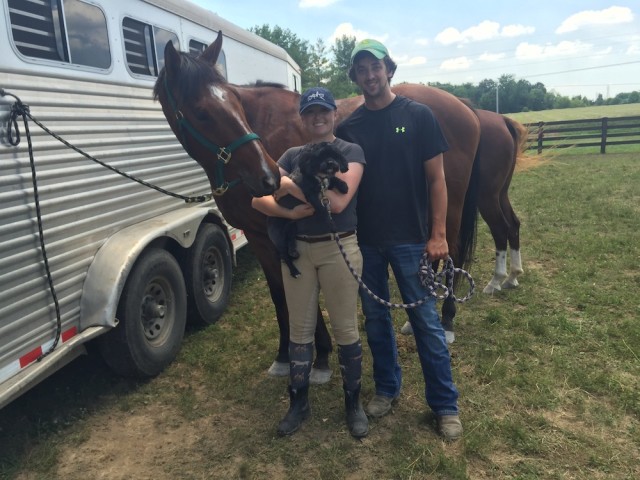 Meagan, Wayne and a growing horse show family. Photo by Wayne DeLisle (via self timer)

I met my now horse-show husband shortly after I put the cover on my saddle and stored it away. Graduating college seemed like the end of an era for me, and as much as I had hoped I would have the time to compete in the IHSA Alumni division, life was taking me down a different path. So the only horse crazy tendencies that Wayne got to see were the constant cries of “slow down!” when we passed horses on the highway and my habitual early morning check-up on social media over my favorite events, riders, and websites.

We lived an hour from my old barn (which is also the nearest barn to our Southeast Missouri location) and I wasn’t immediately able to balance a new career, bills, and a horse at the same time. Wayne got to enjoy a good year with me sans horses before the itch crept back up.

Then he signed away his life on Valentines Day when he purchased me some lessons from my old barn and told me to go and ride and relax.

Step one: Convince spouse that you can’t live without horses.

The next few months were a whirlwind. One lesson a week became two. Then I leased a horse. Then I bought a horse. Then I started showing once a month. Wayne was quietly supportive of all of it, only inserting a sarcastic comment every now and then about how seeing a therapist might have been cheaper than showing horses.

He sat outside the arena with the dad of one of the teenagers I ride with and made jokes about how people could bottle tap water and slap a label with “Miracle Horse Water” on it and how we would pay hundreds of dollars for a bottle. He asked questions, “So you got a blue ribbon because you rode in a circle the best?” He tried to learn the lingo, “Do I need to grab the girdle?” (He meant the girth… sigh). He drove us hours away to a show, he woke up early in the mornings, and he watched me tack up, school, lunge, groom, feed, wash and compete.

Step two: Expose him or her to the environment.

It wasn’t long before he realized he had taken the place of the typical “Horse Show Mom,” only in husband form. He started helping me groom, he knew what to get when I asked for the lunge line and he was the designated water-bucket-filler-upper. The kids started asking, “Hey Wayne, can you grab my tack trunk for me?” and he would run to the trailer and unload all of them because he didn’t know which one belonged to who. He learned how to give me a leg-up, all though his first attempt almost launched me over the back of my high strung, green, OTTB who was having a small panic attack at that very moment.

He decided he kind of liked SmartPaks: “This is pretty easy, but please tell me why we bought a horse who needs all this junk?” He started asking, “Did you do bad or was Joey being naughty?” and learned that most likely the answer was that I sucked and Joey saved my butt… except for the time that Joey remembered his racehorse days and galloped around the arena in our flat class and I rode past him and mumbled, “I have no brakes.” I caught him petting Joey and whispering to him, “Don’t kill her and I will keep feeding you.” It was growing on him, slowly but surely, he was figuring it all out.

Step three: Give him or her a job so he or she feels useful.

When he started asking me how I got the horse to get the correct lead and would comment on a horse’s form over a fence, I knew he was there. Yes, he still makes smart comments about how much money or time my hobby consumes, but he kept supporting it. On our sleep-in Saturdays he would wake up with me early in the morning to drive an hour and film me as I schooled Joey. When I asked him if he could haul another trailer for our barn to a show, he didn’t hesitate. (However, he still balks when SmartPak and Dover catalogues appear in our mailbox because he knows I am going to go through and circle everything I would love to buy.)

At my second show with my greenie Joey, Wayne busted his butt from 5:00 in the morning until 5:00 in the afternoon helping us feed, water, muck stalls, tack up, school, lunge, film our rides, meet me at the in gate for some words of support (and to whisper to Joey that he better cut that fast crap out), load everything in the trailer including horses and then he drove the two hour drive home so I could sleep. He had water for me after every trip, he took tons of cute photos because he knows I love Instagram, and he only flinched a little bit when I closed out at the office at the end of the day.

I couldn’t ask for more in my newly trained Horse Show Spouse. I am so appreciative of everything he has done and continues to do to make my dreams with Joey come true. So in the little time we aren’t doing horsey things I happily sit in the bumpy buddy seat of a combine with him, or listen to him talk about soybean prices, or go sit in a boat in the hot summer sun for hours and pretend to love fishing while I daydream about the day I can show at Tryon. Being an equestrian is a way of life. It’s a family affair and my small family has become a horse show family.

Step four: Thank goodness for everything you have and appreciate the horse show spouse behind the scenes who helps make it all possible.

Meagan DeLisle has spent her whole life clipping photos of horses out of magazines and dreaming of the day that her photo appears in one. She spends her days balancing her new marriage, a demanding career, and a desire to spend every free moment in the saddle.