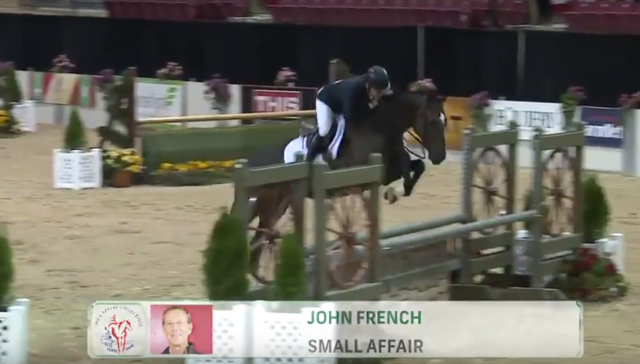 The USHJA World Championship Hunter Rider Finals took place at the Capital Challenge Horse Show over the weekend, and John French clinched the Professional title with a great performance!

The Capital Challenge Horse Show, held annually in October at the Prince George’s Equestrian Center of Upper Marlboro, Maryland, hosts the USHJA World Championship Hunter Rider (WCHR) Finals, welcoming the top hunter rider talent in the country in a variety of divisions. Headlining the Finals is the Professional division, in which the nation’s top trainers and professional riders square off in three rounds of competition.

Competition format was unique, offering the judges and spectators an opportunity to see how well the professionals handled an unfamiliar horse: riders catch-rode donated horses for the first two rounds and then furnished their own mount for the third and final round. John French led all three rounds with scores in the 90s, culminating in a final score of 271.32.

Said French in a press release on our sister site Jumper Nation, “I actually this year just tried to not think so much […] That was my new thing, just to go in there and don’t even think. That’s something that I read in sports books about how people like golfers get ready or get in the zone. I always read ones that say you just don’t think when you get nervous or for a big competition like this. I just tried that, and it worked pretty good.”

Yep, we’d have to agree! Congratulations to John French for capturing the WCHR Professional Championship.