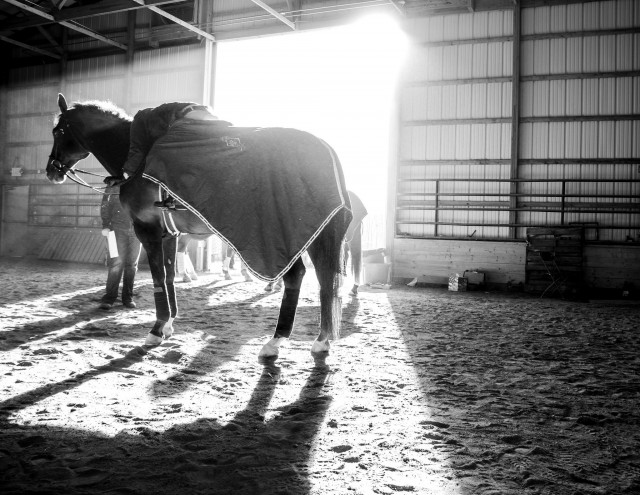 By definition, it’s the place you ride your horse. In reality, it’s so much more. In our creative “More Than” series, we’re taking a meaningful look at aspects of our horse life.

It’s more than a riding arena.

You can still remember your first day at your lesson barn: whether you were ready for your first lesson or just visiting, you remember the taste and smell of the arena dust, the way it both hung in the air and settled on every surface as you stood by the rail watching students in their endless circuits. The lesson horses towered over you like giants as they trotted around and around and the students on their backs were Olympic heroes as they practiced their two-point, their arm circles, the magical moment when they dropped their stirrups for around-the-world.

The arena was the place you went for your first ride, swaying gently to the easy amble of the oldest and most patient lesson pony. Perhaps your fingers clutched at a pair of well-worn rainbow reins or instead the front of your saddle as your instructor held a lunge line in her hand. You bumped along in two-point at a steady trot, your helmet sliding down over your eyes as you learned the first steps of balance, the tiny foundation of feel.

As you grew older, you never wanted your lessons to end — you could ride for hours if you were allowed, walking and trotting and bouncing along in an unbalanced canter because you just wanted to go fast, as fast as you could, and words like collection and uphill and bend still meant nothing. Your first crossrails were a right of passage, a significant step up from the trot-over poles or cavaletti. The arena was your playground and you never wanted to go home. Soon you were one of the big kids now, allowed to jump things like the rolltop and the brick wall. You got to ride in the big outdoor ring where the advanced lessons went. You brought home pile after pile of ribbons from the barn show, the local circuit, and knew that you were a good rider.

Somewhere around the time you officially became a teenager, something in the arena shifted — perhaps it felt a little smaller than it used to, or your instructor’s repetition of “do that again!” rasped over and over again in your brain a little too loudly. Maybe there was one big, bad fall — an ugly spill into an oxer, or the first time your barn project horse really and truly bucked you off. The walls felt too close, the lights too glaring and bright, the circles too endless and there were some nights where you couldn’t wait to dismount and put your horse away and turn your back on that space. You always came back.

The arena witnessed your greatest triumphs, the hard-to-describe “lightbulb moments” where it all suddenly clicked and came together. It also saw you fall, whether you were literally tumbling to the ground or when the frustration and reality just came crashing through too strong. You’d circle your horse in the middle, staring at the corners of the arena, hoping no one noticed when your eyes welled up with tears. In a given week you could ride on top of the world and also know the deepest limits of impatience, embarrassment and disappointment.

You can still remember your first time riding in a coliseum, the ceiling so high above you that in the bright lights you could have sworn it wasn’t even there, that the walls simply rose higher and higher until they melted into the night sky. Your memories of those shows flicker back in images and sounds: horses and riders silhouetted in the tunnel to the in-gate; the cavernous silence in the stands during a really good round; the cheers and whistles from your friends when it was finally your turn to ride into that brightly-illuminated space that felt miles wide.

No matter how many shows you attended, whether big or small, you swore every arena was different, even if the color of the footing or the banners on the wall or the dimensions were the same, no matter how many shows you hauled to in the course of a season or the number of weeks you spent on the road. Even though the layout was the same, you could sense a subtle difference, the “feel” of each place, the accumulated memories of indescribable triumph and overwhelming loss that one place could absorb in its lifetime.

It’s more than a riding arena.