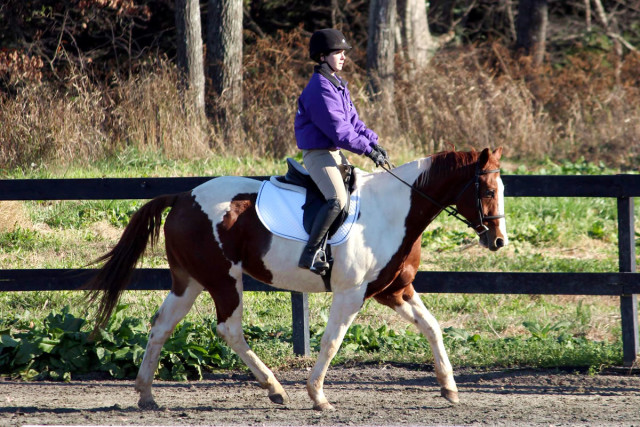 Ainsley’s horse JJ is back in (trotting) action!

JJ says: “Hey mom, can we rethink this whole trotting this? It’s harder than I remember!” Photo by Erik Jacobs/P.TEN Marketing.

Amateur eventer Ainsley Jacobs has been chronicling the slow process of bringing her horse JJ back into soundness after a collateral ligament injury. After months of stall rest, JJ was cleared to tack walk. Ainsley brings us the latest update; catch up on her past columns by clicking the #LESSONS LEARNED hashtag at the top of this piece.

Not long after we first started walking under saddle again, I had to go out of town for two weeks. The idea of leaving my boy during his rehab was awful, but, fortunately, I had enlisted the help of my friend, Cyndi, to act as a babysitter.

Cyndi is a fellow eventer who rides at Go With It Farm, and she’s one of the most careful, considerate riders I’ve ever met. I felt completely secure leaving JJ in her hands, and she was excited to be able to help with his rehab. Each day after she walked him, she’d send me a full report via email about all the cute/silly things that JJ did, and track his progress in detail. I loved getting those emails, and I’m so incredibly grateful to have friends that I can trust to give JJ the best care possible.

Thanks to Cyndi and everyone else at GWIF (especially Halliea and Beth), when I came home, JJ was more than ready for his next vet visit. The check up went well, and as of August 27, after five months of stall rest, JJ was officially cleared by Dr. Carter to start light trotting and limited turn out!

JJ and I had both been waiting months for this day to come, so I assumed that when he finally got to go out without being attached to someone, he would celebrate like crazy. As usual, though, my little horse surprised me.

I led him into GWIF’s small arena, closed the gate, unclipped his lead rope, and turned him loose. Instead of running around like a wild child, he casually wandered over to a ground feeder and started devouring the leftover scraps that were in it. Yep, my chubby little boy chose to spend his first taste of freedom doing what he loves best – eating.

JJ chose to spend his first taste of freedom doing what he loves best – eating. Photo by Ainsley Jacobs/Ride Heels Down.

For thirty minutes, JJ wandered around trying to graze on the grass outside the arena. I found it highly amusing that, after being cooped up inside for so long, he was totally content to do absolutely nothing. Eventually, he finally exploded and took off running and bucking (and farting) like a yearling. It made my heart happy to see him playing and enjoying himself, although he promptly stopped and realized that, hey, all that exercise is HARD!

After he’d gotten the kicks out of his system, I led him back inside so that I could groom and tack him. Dr. Carter had given us a “prescription” of 5-minutes of trotting (which will bump up to 10-minutes after two weeks, then to 15-minutes after another two weeks, and we’ll finally think about cantering two weeks after that) two days on and one day off, and I made a plan to spread those minutes out into 1- and 1.5-minute intervals interspersed with walk breaks.

After we did a few minutes of warm-up walking, I asked JJ to trot. His response was pretty amusing, as he really didn’t believe me at first.

His first minute of trot was hilarious. I felt like I was riding a green-broke baby horse who had no idea how to move with someone on his back. He was crooked, he was unsteady, and he was awkward as hell. After doing nothing for so long, it was almost as if JJ had forgotten how to trot. I couldn’t blame him, though, so I just took it slow and let him re-learn how to use all his legs and find his balance again. And, after that, my smart boy was absolutely perfect.

When we finished, JJ got more turn out time but he was too tired to do anything other than stand there and stare at me. So, I sat on a mounting block and just hung out with him. When I went to leave, he started following me around. Prior to his injury, he had been horrible to catch and would run away from people, so I was curious about this new behavior. Wanting to test things out a bit, I started walking and stopping in random patterns. JJ stuck to my side like glue and mimicked my actions – cool!!

Early on, JJ had a tough time with all the exercise and the poor kid would huff and puff like he had just finished a run on the cross country course by the time we were done. He’d get tired easily, but when I asked him to put in a little effort, he always happily obliged and tried his best to work hard for me. Fortunately, his fitness has been steadily improving.

Now, two weeks since that first trot, JJ’s able to hold himself in a frame, engage his hind end, and 5-minutes of trotting doesn’t seem to tire him out. He even comes right up to me at the gate and lets me catch him when he’s in his little rehab arena, which is amazing. I think my horse has Stockholm Syndrome, and I’m totally okay with that.

The most valuable thing you have in your barn isn’t your trailer, your saddle, or even your horse – it’s your barn family. Friends ARE family, and the relationships you make at the barn will be some of the most stable (pun intended) you’ll ever find. People who were once complete strangers will be happy to put their lives on hold to help make yours a little easier, and that’s something that shouldn’t go overlooked or unappreciated.