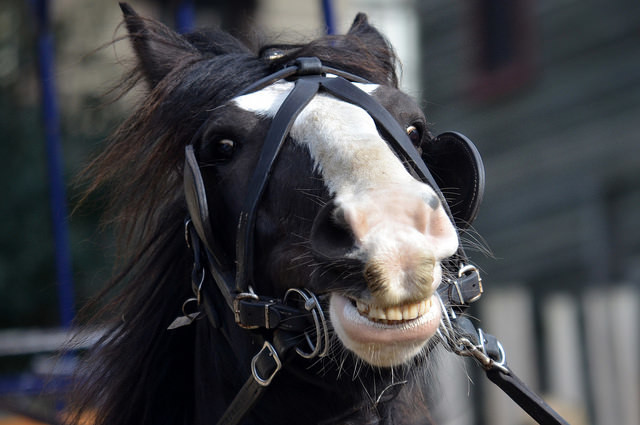 Any press is good press, right?

Oh horses, you just can’t stay out of the news, can you? Sometimes, a Google News search for “horse” will bring up all sorts of interesting stories about horse rescues, horse races, abuse cases, viral videos and more … on other days, I feel like we’re scraping the bottom of the feed barrel. But hey — whether or not these horses and horse-related people are truly newsworthy or not makes no difference to us. We just hope they enjoy their five minutes of fame.

Cyrus the Clydesdale, just two weeks’ into his new life after being pulled from the New Holland auction, was believed to have been chased by another more dominant draft right into a muddy swamp in a neighboring pasture where he got completely stuck. A harrowing hours-long rescue culminating in Cyrus being lifted via crane and carried to another field has the big guy back on his feet again and recovering at Unionville Equine Associates hospital. Once he’s recovered fully from his ordeal, he’ll ship to his new owners in Virginia who adopted him after his rescue; Cyrus was being temporarily boarded in Pennsylvania when he found his way into the mud hole. [Horse rescued from Chester County mud hole is recovering]

According to tabloid New York Post, an NYPD detective is suing a Brooklyn barn for negligence after he fell off during a ride. Marcelo Razzo claims his instructor took off on his horse because “it was getting late” and Razzo’s horse followed suit, dumping Razzo to the ground. Allegedly, this incident took place back in 2014; Razzo claims to have suffered a series of injuries. The key word here may prove to be “tabloid.” [Hero cop thrown from horse sues Brooklyn riding school]

This latest design takes “horse shoes” to a whole new level. Now you too can clip-clop around on four-inch heels designed to look like horse hooves, just like you dreamed when you were a kid. Even better, you can buy the hair extensions that give you that Clydesdale look, and we know how you all feel about those Clydesdales. Read the whole article for details on how you can plunk down $285 (might as well just spent that money on your real horse’s shoes) or you can just watch the totally-weird video below. [These High-End $275 Horse Shoes Are Perfect For Halloween]

You could buy an Aston Martin, or you could buy this rocking horse. Or, you know, several real horses … anyway, this hobby horse for sale by Marc Stevenson includes 82,000 Swarovski crystals and will be hitting the market at £98,400, which definitely makes it a wonderful toy for the kids. Compounding the cost and the highly-uncomfortable-to-play-with appearance of the crystals, we’re also finding the expression on this toy horse’s face to be equal parts hilarious and haunting. [The rocking horse worth as much as an Aston Martin: £98,400 toy comes complete with 82,000 Swarovski crystals]

A bunch of wedding guests kicked a drunk guy out of the reception, and when he tried to sneak back in through the horse corral he got kicked out again by an actual horse — literally. You know what, we don’t think there’s anything left to say about this one. Well played, horse, well played. [Man kicked out of Santa Rosa wedding kicked by horse]