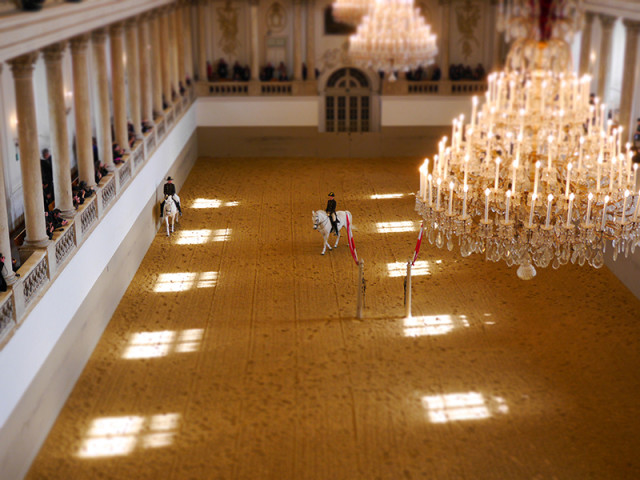 It’s home to the breathtaking and impeccably-trained world famous white Lipizzaner stallions — but there’s a lot more going on behind the scenes! Here are our favorite facts about the Spanish Riding School.

The Spanish Riding School of Austria is iconic to equestrians as the home of the famous white Lipizzaner stallions, the fabled hall where riders learn the ancient methods of horsemanship and horses learn to dance and perform haute ecole or “high school” maneuvers. It celebrated its 450th anniversary in 2015. For those of us who have not yet been so lucky as to visit the Spanish Riding School in person, however, there’s much more than meets the eye — here are a few things you may not have known about the school, the Lipizzaners and the entire experience!

1. The Spanish Riding School in its entirety comprises three campuses: the school in Vienna, the stud in Piber and the training center in Heldenburg.

The Spanish Riding School of Vienna is certainly the best-known branch: this is where the stallions live as well as perform. Performances take place in the iconic Winter Riding School, as well as morning exercises and training.

The stud in Piber breeds the Lipizzaners who eventually perform in the Winter Riding School: in a mutually-beneficial arrangement, the best stallions are selected for haute ecole training and performance and then will return to the Piber stud to breed for at least one season, ensuring that the best of the best are passed down with regards to genetics. Mare lines trace back to the middle of the 18th century, demonstrating that Piber has long had a tradition of excellence. The mares undergo their own training and performance tests, and do not start any under-saddle work until age five.

The Heldenburg training center has hosted the Lipizzaner stallions on their summer vacation since 2005; the performance stallions spend six to eight weeks relaxing here in July and August. Young stallions are started at Heldenburg and will train here for a few years before being sent to Vienna. Heldenburg is also a training center for classical dressage, catering to international-level dressage riders seeking instruction. Stallions retiring from the performance string will live out their days at Heldenburg.

2. The art of haute ecole, or “high school,” is now recognized by UNESCO as Intangible Cultural Heritage.

This term designates aspects of culture and traditions that are handed down from generation to generation through oral traditions, performing arts or other rituals. Each fully-fledged Rider of the Spanish Riding School teaches the Assistant Rider orally — there are no written texts.

3. Starting in 2001, women have achieved some prominent positions within the Spanish Riding School.

Traditionally a male-dominated organization, the Spanish Riding School has welcomed women in recent decades: the School’s current managing director Elisabeth Gürtler took her position in 2001, the first woman in this role in the entire history of the School. The equestrian world also cheered in 2008 when the first female students were accepted into the prestigious training program at the School. The Spanish Riding School maintains that women have never not been allowed to apply; simply that none had been selected before this point.

In September of this year, Hannah Zeitlhofer made history as the first woman to reach the rank of Rider: she was one of the two women first accepted as students in 2008 and worked her way through the ranks in eight years — a typical period for most students to reach fully-fledged Rider status. She will now perform in the Winter Riding School and will mentor her own Assistant Rider.

4. The Spanish Riding School of Vienna is also a destination for architecture lovers, among other unique programs.

Yes, you can take a tour of the Baroque roof structure: the tour includes a visit with the stallions and a look at the stables, and then culminates in a 170-step climb to the roof.

Other unique events at the School include a gallery display of priceless artifacts and objects, a “Piber Meets Vienna” session (held while the stallions are on their vacation) that showcases the mares and foals as well as the other talents of the Lipizzaner breed, and unique performance/concert in combination with the Vienna Boys Choir.

5. Lipizzaner horses are available for sale through the Piber stud.

Okay, so you won’t actually ever be able to purchase one of the perfect white stallions who performs in the School, but you can purchase animals from these world-class bloodlines. About 45 Lipizzaners are foaled at Piber each year but far fewer make it into the training program, so there are always some available for sale to the general public. At the moment, there are four lovely grays listed on the Spanish Riding School’s sales page for you to covet if you’re looking for your next dressage or driving mount (or just really like scrubbing manure spots off of your animal).

Learn more about the Spanish Riding School and its unique world of history and tradition at its website! Go Lipizzaners, and go riding.