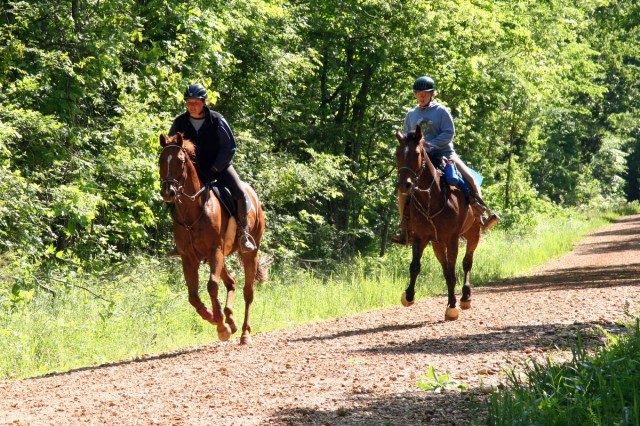 Martin Black and Dr. Stephen Peters, the founders of Evidence-Based Horsemanship, which pairs the understanding the science behind a horse’s natural behaviors with empirical evidence, offer a few tips for the trail and the science behind each.

What do you think about on a trail ride? The blue sky? The birds above? The upcoming creek crossing? The deer that could jump out in front of you at any moment? What about your horse’s brain?

What would you say if you learned that, by considering the science of your horse, you could make your next trail ride even more enjoyable?

Some riders might get frustrated and give up, others might kick, jerk, and and finally scoot across. If the pair makes it across, both horse and rider might be more than a little stressed.

Science tells us that the horseman should push the horse to the edge of his comfort zone, pausing while the horse explores each new frontier to offer reward.

A horse doesn’t see life the same way humans do. While they have a very wide field of vision, about 300 degrees, vertically their vision is very limited. Horses also can’t see directly in front or behind their bodies. This means that the horse will need to move his head up and down, left and right to get a good look at the creek. (Hint: Also keep his need to control his own head in mind while traversing difficult or steep terrain. He’ll need to get a look for sure footing!) He might want to get his nose close to the creek, sniffing and touching it with his vibrissae (his whiskers are actually powerful sensory organs that send signals to his brain!) while collecting as much information about his surroundings as he can.

By allowing him to explore while challenging his comfort zone and offering breaks to reward progress, the rider is building the horse’s confidence. The real reward, though, comes as a neurochemical treat called dopamine. This is a feel-good chemical commonly associated with licking and chewing, and comes about when the horse has been relieved from stress. The exploration, along with the reward, makes the learning process a positive experience.

If the rider restrains the horse’s head while depriving him of the opportunity to get a good look or forces the horse across, he could very possibly be harming the horse’s learning process.

In some instances, it’s good to have a horse that’s very desensitized. No doubt that a child’s horse should be unflappable, but what about for the rest of us?

Horses are designed to be responsive and sensitive, with a healthy amount of self-preservation. It’s that self-preservation as prey animals that has kept them alive for thousands of years — it’s been essential to their survival. Why take it away from them?

“This self-preservation is the basis for most training methods, encouraging the horse to seek relief by giving to pressure,” Black adds. “We make learning difficult for the horse if we try to eliminate their desire to find comfort. If we assure them that they never need to yield to pressure, there’s no motivation for them to change.”

While your horse might not have to worry about lions or tigers or bears in captivity, his inherent self-preservation instinct is not only what makes him easier to train, but it’s also what keeps him in tune with the world around him. An overly desensitized horse might plug along robotically on the trail, zoned out, with his nose stuck in the tail of the horse in front of him.

If his need to tune in to the rest of the world has been taken away, how can he be aware of danger? Say, for example, there’s a rattlesnake slyly coiled on the edge of the trail. You might not see it, but, provided your horse’s need to protect himself is still intact, he will and avoid accordingly.

Evidence-Based Horsemanship doesn’t suggest that you take a half-trained horse out on the trail for a bronc-busting good time, just that the horseman is careful how much of the horse’s natural instinct he takes away.

Not every trail ride is perfect. Some days, your horse feels like he may have ingested high-octane jet fuel prior to saddling up. Other days, he might lack his usual confidence and spook a bit more than usual. Or, perhaps it’s his first solo trail ride. Whatever the case, wouldn’t it be great if there were a reset button to relax your horse? Good news — there is! And the answer is simple: let your horse graze.

Let’s say that your horse was plugging along down the trail in a steady rhythm, when suddenly a deer leaps across the trail. Your horse might startle, bolt or buck, or all of the above. Let’s say you make it out of the escapade unscathed, but your Calm Connie is now a Nervous Nancy. Your horse needs to go back to homeostasis, or his nervous system’s balance point.

Yes, we’ve all heard that we shouldn’t allow our horses to graze when undersaddle but, the truth is, that’s one of the ways he can get back to homeostasis. As the horse chews grass, he salivates, which helps relax the gut. If there’s no grass available, you can encourage him to work his mouth. Though your friends might look at you funny, you can stick your finger in the corner of his mouth—this will actually encourage him to lick and chew!

In Evidence-Based Horsemanship, we use the image of a pyramid (pictured) to illustrate the various mental states of the horse. As the horse moves up the pyramid, he moves closer to the fight or flight impulse. The optimal learning mental state lies just outside of the horse’s comfort zone, but before he enters into the fight or flight zone. Illustration courtesy of Evidence-Based Horsemanship.

This is just the tip of the iceberg. Having a grasp on the science behind your horse goes far beyond trail riding. It can help you accomplish training goals, improve horse management practices, and even help out your friends. But, the real treat is having a greater understanding of your horse.

About Evidence-Based Horsemanship: When Dr. Peters and Black first met in 2010 at Legacy of Legends, they were just two men — a neuroscientist and an acclaimed horseman — who wanted to talk horses. While Dr. Peters’ approach was scientific, he wanted to draw on the thousands of horses that Black had worked with over the course of his lifetime, and compare findings.

Together, they were able to corroborate discoveries. What Peters lacked in experience, Black had an abundance to share. What Black lacked in scientific knowledge, Peters was able to provide context, science and an all-new vocabulary. The pair used this teamwork to coauthor Evidence-Based Horsemanship in 2012, released the coordinating DVD in 2014 and have regularly traveled the country presenting their findings with presentations and seminars.

About Dr. Stephen Peters: Dr. Stephen Peters is a board-certified neuropsychologist with Utah Valley Regional Medical Center, specializing in brain functioning. As a neuroscientist and horse brain researcher, he has given numerous presentations and regularly performs horse brain dissections for those eager to learn tangible specifics of equine neuro-anatomy.

About Martin Black: Martin Black is a fifth-generation horseman and rancher who grew up starting colts and handling cattle on the open range. His unique early life experience prepared him for a management position on one of the largest ranches in the Great Basin by his late 20s. After his management stint at the ranch, he spent 15 years operating a contract-based colt starting business—he’d start as many as 500 colts a year, running the gamut from mustangs to million-dollar racehorses. Over time, his practice evolved as he began to focus on helping people throughout the world, across all disciplines and breeds, though his clinics.