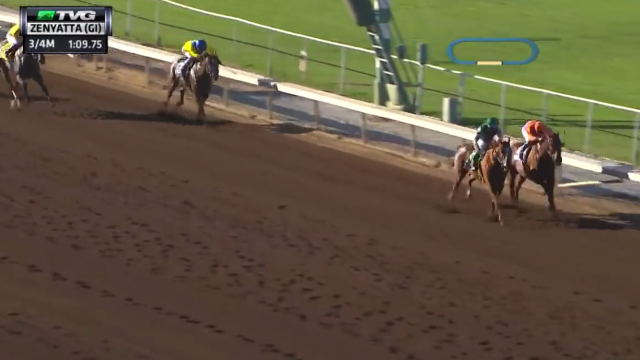 The West Coast mecca of racing kicked off its meet with two fabulous match-ups: California Chrome and Dortmund in the Awesome Again and Beholder and Stellar Wind in the Zenyatta!

Santa Anita is a Thoroughbred haven for those who love racing: nestled beneath the mountains in California, the track consistently draws the best in horses, owners and trainers and the opening weekend was no exception. Two exciting West Coast rivalries played out on Saturday in the Grade I Awesome Again Stakes and the Grade I Zenyatta Stakes.

This rivalry has been the theme of California racing for 2016, and frankly I’m starting to feel bad for Dortmund: this big (seriously, he’s huge — look at him towering over Chrome) colt is not a bad horse by any means, but he seems to have the ill luck to go up against some living legends. His three-year-old season was overshadowed by a horse named American Pharoah and now his four-year-old year pits him up against California Chrome in seemingly every start.

It doesn’t look like there’s a horse out there right now who could beat Chrome: the five-year-old has matured physically and mentally and just lays down classy performances every time. It was a two-horse race on Saturday until Chrome eased away: he won under a hand ride by Victor Espinoza and in fact looked like he had plenty left in the tank under the wire.

This rivalry is much less one-sided than California Chrome and Dortmund: Beholder, a three-time Eclipse Award winner and two-time Breeders’ Cup champion, and Stellar Wind, the champion 2015 Three-Year-Old Filly, have gone head-to-head several times in 2016. Beholder bested Stellar Wind in the Vanity Mile; Stellar Wind took it back in the Clement L. Hirsch Stakes.

The Zenyatta, also run on Saturday, culminated in a thrilling duel all the way to the wire:

(Arguably, no one had a better day on Saturday than Victor Espinoza, who racked up two Grade I wins.)

Should both of these mares be headed to the Breeders’ Cup Distaff, we’ll likely be treated to another nail-biting race. (And we’re always hopeful that undefeated three-year-old Songbird might be in the mix as well!)

Every week we’re a little closer to what’s sure to be an exciting Breeders’ Cup: keep it locked on Horse Nation!