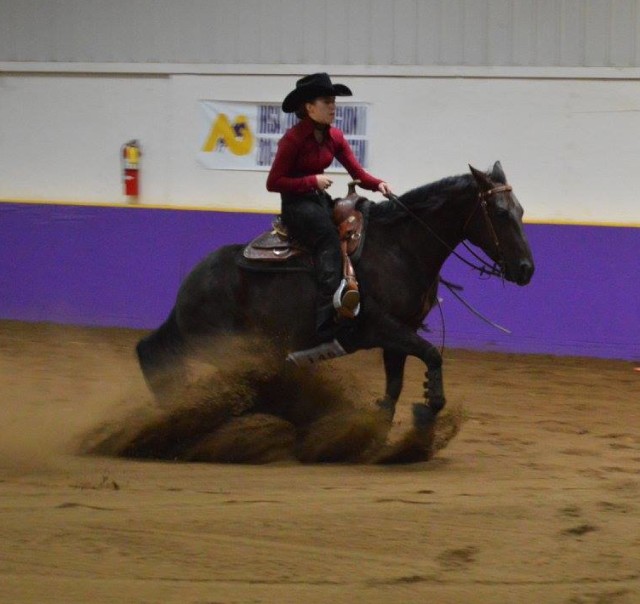 Haley’s first show of the season didn’t quite go as planned.

One of the most frustrating aspects of horse showing is that one mistake can drop you to the bottom of a judge’s card with little hope of redemption. You’re having the ride of a lifetime and then, boom, you lose a stirrup, blow a lead, or break gait — and all the good moments stop mattering because you KNOW the judge looked right at you and probably wrote “worst rider ever” next to your number on the scorecard.

With this knowledge, the easiest route to take is to slump your shoulders, shake out your reins, and give up. The hardest thing to do in that moment of recognized failure is to keep your chin up, gather yourself and your horse back together, and continue on with composure.

For me, this split-second decision has been a defining moment at several points in my riding career — I matured a great deal the first time I was able to smile through mistakes and keep riding rather than throw the mini-tantrum typical of little girls at horse shows. I have accepted many a disappointing class result with laughter and resolve to do better the next time, for which I have several coaches to thank. This attitude and the importance of sportsmanship have been drilled into me through years of riding, but that doesn’t mean I no longer feel the urge to yell “UGH!” and storm out of a class when I go off-pattern or have a major fault. The resolve to keep riding is a constant work in progress that I will always have to consciously maintain.

This weekend marked the first IHSA show of the season for Alfred University and my debut in the Open Reining and Horsemanship division. As a team, we won both shows with points to spare. As an individual, my return to reining for the first time since my senior year of high school was both thrilling and terrifying. There’s nothing like the feeling of a reiner galloping headlong into a rundown beneath you — until your “whoa” and deep seat are met with no reaction, and you’re past the end marker on a horse that wants to run twenty-seven more times around the arena before stopping.

Needless to say, my first sliding stop was ugly (to put it kindly). This was reflected in the photos posted after the show—despite my extreme embarrassment, those pictures are funny. They are unflattering in every aspect, on my part and my mount Jeri’s, but I can’t help but chuckle at both of our “oh crap” expressions.

That stop was the first maneuver of my reining pattern. I was the first draw with three tough riders to go after me, and at that point I thought I had blown it. It wasn’t bad enough for me to have any hope of fulfilling my ridiculous bucket list goal of earning a negative reining score (how many kick-outs would I need to get below a zero in Pattern 3?), but it could have been bad enough for me to score well below the others. I had the option in that moment to school the rest of the pattern—to lope or even jog into the next stop, to roll back the wrong way on purpose, or to take two hands and get after Jeri for having charged through a stop (even though it was my fault) — or to shrug my shoulders, keep riding, and hope for the best.

I took a moment to breathe, then rolled back and lope-charge into the next stop, which was marginally better but still poor. My circles came next, which were rushed but generally correct, and then I lined up for the last sliding stop down the center of the arena, followed by a back-up and spins. Jeri, who was probably sick of me flopping all over her back during bouncy stops, decided to really sit down and slide into the last one, then back up softly and flow through both sets of spins. When I told her “good girl” after that pattern, I meant it.

The good made up for the bad, but had I not given Jeri the opportunity to relax and run the rest of the pattern like she knows how, I would have ended the day with a ride that had no redeeming qualities. It could have easily become worse, but had I quit mentally there would have been no chance of improvement.