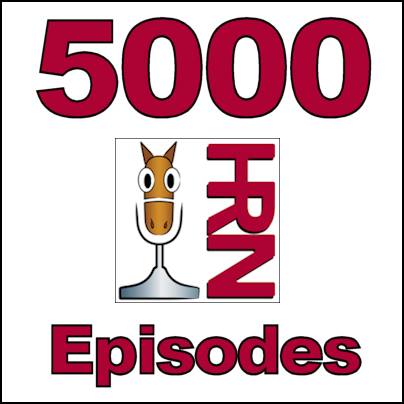 The Horse Radio Network, already recognized as one of the leading podcast networks in the world — that’s the entire realm of podcasting, not just equestrian networks — reaches another milestone on Friday, September 30: the Horses in the Morning show will be the network’s 5,000th episode!

To put this in different terms, that’s 240,000 minutes of horse-related podcast content: if you wanted to catch up on all of the Horse Radio Network’s episodes to date, you’d have to listen 24 hours a day for 6 months. Few podcast networks have ever achieved this kind of success — there are some major corporate networks who have produced thousands of episodes, but for a grassroots network built from the ground up, that’s a huge feat indeed.

The Horse Radio Network over its 5,000 episodes has featured over 6,200 guests, growing from just 12 loyal listeners to the original show to tens of thousands of international listeners to its 10 shows. Glenn the Geek, creator of the Horse Radio Network and good friend of Horse Nation, revealed that HRN has one loyal “legacy listener” — Rhonda, from Canada, has listened to every episode!

With this unprecedented growth, the HRN has become a leader and pioneer in the podcasting field — but the HRN team has maintained its grassroots feel and friendly community. Listening to an HRN podcast on any of the 10 shows is like hanging out in the barn aisle after a ride with your friends — friendly banter blends seamlessly with great information from industry leaders in all aspects of the horse world. The auditor community — an exclusive Facebook group for listeners — has become an online family, with tight-knit camaraderie and lots of friendly exchanges of information. Listener meet-ups take place regularly every time the hosts travel: Glenn and his network of hosts truly treat all listeners as friends.

We spoke with Glenn about some of the Horse Radio Network’s greatest moments over the years and thousands of episodes.

HN: The 5,000th episode happens to fall on International Podcast Day! How did that work out — did you do that on purpose?

HN: Out of all 5,000 episodes, do you have one that stands out as your favorite?

I have two: “the King and Mickey Mouse!”

My number-one favorite was the episode we did at Graceland in 2011 — we did the entire show out of the barn there, and we’re the only radio show to have ever done that. We met the lady who took care of the horses while Elvis was still living there, and she just took over the show for the next hour, telling stories. It was an amazing experience. [Replay that episode here.]

My second favorite was our Disney episode: we did a show at Disney World, and that really started a great relationship we have with Disney. The previous day we went on a trail ride at Fort Wilderness, a carriage ride and met all of the horses. The reason this show was so special was that we met Robin, a staff zoologist, who brought out this scrapbook about Walt Disney and all of his horses — the original photos! Disney loved horses; he loved all animals. That’s why there are still horses at Disney World today. [Replay that episode here.]

We now have a great relationship with Disney — they’re actually coming on next Wednesday to talk about Animal Kingdom!

Our biggest event was last year’s holiday Radiothon. That was 12 hours of broadcast, we had over 250 listeners call in and listener voicemails to play; we had over 30 big-name guests throughout the day. Any radio show that includes both Charlie Daniels and Bob Baffert has got to be big!

At one point we had 20 callers all on at the same time … I didn’t even know if it was going to work, I just tried it. Our auditors are already planning their call-in messages for this year’s Radiothon, so we’re definitely looking forward to putting that on again.

HN: If you had a “do-over” button, is there anything you would change?

I would have never said “I need new tights.” Jamie made it into a sound bite and she replays it ALL THE TIME.

And I know Jamie would have never done the Sheath Cleaning Song, because people bring it up all the time.