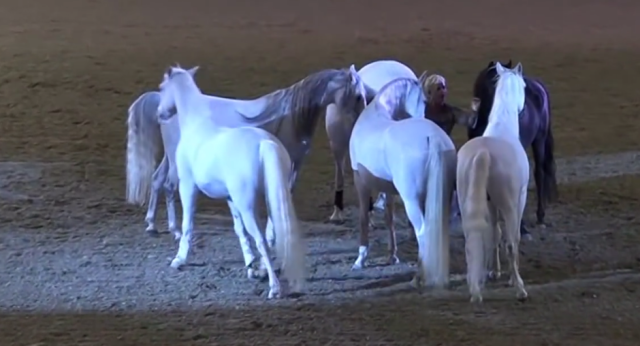 Kick off your Tuesday with the captivating liberty performance of Sylvia Zerbini and her 10 Arabian horses!

Part of the fun of watching a liberty performance is witnessing the spontaneity of horses when they’re allowed to interact freely — kicking up their heels at a fellow horse, tossing their heads or stretching their necks while still being attuned to their handler. The liberty performances of Sylvia Zerbini are particularly intriguing for this reason: her performances are not so regimented that every single movement of the horse is dictated. Her large-group sessions are more about observing the dynamics of the horses in a herd rather than a contrived set of tricks.

Watch Sylvia and her 10 Arabians performing at the Del Mar National Horse Show earlier this spring:

These liberty performances have been described as the viewer getting to witness not an act but a glimpse of the relationship between Zerbini and her horses — we think that’s pretty accurate!

Zerbini was the former star of Cavalia, the famous equestrian traveling performance that celebrated the horse. On her own now, Zerbini travels the country with her horses for both performances and clinics; she is based in Florida when she’s not on the road.