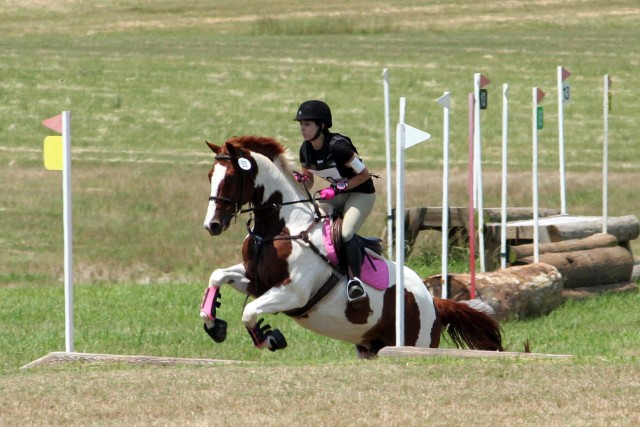 Adult amateur event blogger Ainsley Jacobs takes us on another flashback to 2015 when she learned a game-changer lesson, the impacts of which she still feels today!

Letting him run means both of us are happier! Photo by Erik Jacobs/P.TEN Marketing.

June 2015: I’ve had a lot of ups and downs lately. We’ve had struggles and successes, but it’s been tricky to do anything regularly. I figure the more events we can go to, the more practice we’ll get, and we’ll start being more consistent.

I’ve been talking to a few of my more-experienced eventer friends lately, and the one thing they all keep saying is that “eventing is a galloping sport.” Whenever I whine about the fact that galloping between the jumps is scary because I don’t really feel like I’m in control, they all laugh and say they have the same problem!

The key is to realize that it’s OKAY to be (slightly) out of control, so long as you can check in with your horse a few strides before the next jump and refocus his attention. His job is to listen to you before, over, and after the fence. Your job is to act like a GPS and guide him – let him take you to the next jump and have some fun running in between!

By not interfering with him between jumps, JJ was much more willing to listen when I did “check in” before each question. Photo by Erik Jacobs/P.TEN Marketing.

Once again dressage was “blah”, but that’s okay with me. We scored 41.05 on Beginner Novice A, then went double clear in stadium like always. Going into cross country, JJ was feeling good and I knew we were going to have a tough time placing well with our dressage score, so I said “screw it, let’s just have fun.” Best. Decision. Ever!

We left the start box in a hurry, and I wasn’t even worried about the possibility of JJ stopping at a jump again. He was going SO fast, but I could tell he was having a ton of fun, and I didn’t want to piss him off by getting in the way of that. So, I just made sure I was balanced, stayed off his back, didn’t pull on his face, and just pointed him in the direction I wanted him to go. Yeah, we had to circle (a LOT) so we didn’t get any speed penalties for going too quickly, but holy heck, that was a blast! He was perfect over every jump, didn’t hesitate at anything, and was such a happy horse when we crossed the finish.

We ended the day on our dressage score and wound up 8th overall. Although I left yet another event empty handed, the lesson I learned, and the confidence both JJ and I earned, was so incredibly valuable.

Eventing is a galloping sport. The sooner you get comfortable with the idea of being (slightly) out of control while galloping between fences, the sooner you’ll start improving!