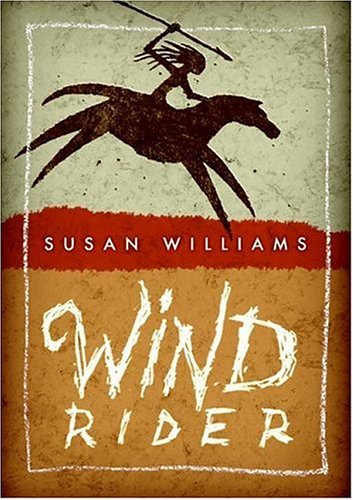 Living in what is now Kazakhstan 6,000 years ago, Fern dreams of riding horses when her tribe only sees them as meat. Wandering the steppe with her dog, Bark, by her side, she discovers a young mare trapped in the bog. She rescues and tames the horse, but must keep the relationship a secret from her family and tribe.

This book has a strong start with the introduction of our main protagonist, a strong-willed fourteen-year-old who loves animals. She is feisty and headstrong and when she finds a horse trapped in mud she refuses to give up … or to report the find to her family who would only use the animal as a source of food. Fern frees, tames and rides the horse eventually, the act giving her a newfound sense of freedom.

Sometimes when I was on Thunder’s back, I would carefully raise myself until I was standing. Then I could see far over the tall grasses to where the earth and sky met in a hazy line. I could see kolki–patches of trees. I could see the river winding through the low grasslands, and the skin huts of the ahne. Hard as I looked, I could not see beyond my world to those strange lands. But I knew they were there.

After the first fifty pages, though, the story stagnates. The author infuses a ton of beautiful detail in her descriptions of Fern’s tribal life and village, but there is little conflict to propel the plot. Most of the tension comes from Fern clashing with her mother, which I hated. This is the third “horse girl” book I’ve read this month where the mother character was completely not supportive. It’s exhausting and, honestly, it’s time that authors and filmmakers began writing stories where women support other women. The time has come. Let’s make it happen.

Towards the end of the book, the story finally picks up the pace when we are introduced to a rival tribe named the Night People. Fern is brought into their village and regarded with extreme suspicion for her “power over the horse.” Her time as a captive was intriguing and compelling, but over far too quickly, covering only 52 pages before the book’s conclusion.

Overall, I feel blasé about this story. I don’t hate it, but I certainly don’t love it either. The author labels the book as science fiction, despite my finding it in the ‘Historical’ section at my library, so it’s easy to forgive a few things such as Fern inventing the word bridle and mysteriously knowing that her lung wasn’t punctured in a time before people understood anatomy. The diction and prose felt awkward at times with the author trying to imitate a language that isn’t totally understood by anthropologists. Some words she used were Proto-Indo-European in origin, while others were Russian. The sentence structure ranged from lyrical to clunky with incredibly poor grammar.

I give Wind Rider 2 1/2 Golden Horseshoes.