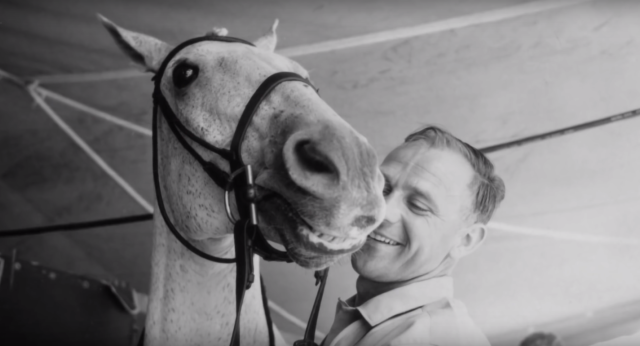 “Harry & Snowman” releases in select theaters on September 30 and we can’t wait to catch it on the big screen!

The long-anticipated documentary about show jumping underdog legends Harry de Leyer and Snowman is just a few short weeks away from its theatrical release! Harry & Snowman will be playing in select theaters across the country on September 30, and will then continue on campaign to a wider reach of cities and theaters in the following weeks.

In case you’re not familiar with the story of Harry and Snowman, Harry de Leyer purchased the horse — who was on his way to the slaughterhouse — from the infamous New Holland auction for $80. Intending to use the animal as a lesson horse for his riding school, de Leyer instead realized Snowman had great potential as a show jumper. Soon, the pair was winning just about every prize in America, inspiring a nation with their underdog story.

The story has been immortalized in Elizabeth Letts’ bestselling The Eighty Dollar Champion (which Horse Nation has reviewed here) and now scenes from de Leyer and Snowman’s lives are coming to the big screen as well in documentary form. Here’s the trailer:

Do you want to catch Harry & Snowman at a theater near you? Here’s how to find out if the documentary is playing:

We’re so excited to see this incredible story on the big screen, with plenty of personal interviews with Harry de Leyer and his family combined with footage from de Leyer and Snowman’s competitive days! Will you be attending a September 30 release? Let us know!