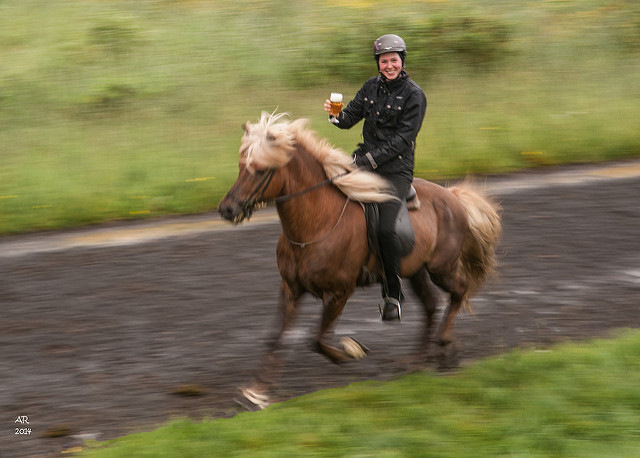 At least, according to a theory proposed by a study published in August.

Yes, that’s a beer in her hand, which makes this our favorite person ever. Flickr/Anita Ritenour/CC

There are seemingly as many breeds of gaited horses — that is, horses performing gaits other than the “typical” walk, trot, canter and gallop — as there are coat colors in the world, from the Icelandic horse to the Peruvian Paso and everything in between. According to 2012 research, however, all of these breeds share the same genetic mutation in the DMRT3 gene which affects patterns of locomotion — basically, this mutation allows the gaited breeds to do their thing, whether it’s the Standardbred’s pace or the Marwari’s revaal.

Which is all well and good — but how did this one mutation spread around the world to literally every continent where there are horses? As it turns out, scientific research would find the answer again: in a study published in August of this year, researchers traced the DMRT3 mutation through the remains of horses in archaeological collections — all the way back to two horses from a region of England that makes up present-day York, who lived around 850-900 AD.

Conveniently passing through the region at the same time were those lovable, charming marauders known as the Vikings. Native horses from the same time period from the Vikings’ homeland of Scandinavia don’t show any DMRT3 mutations — but as any horseback rider knows who has experienced the unique joy of flying down the trail on a gaited breed, the concept of a smooth ride would have been quite appealing to a culture that spent long hours in the saddle. We might never know if the Vikings stole, purchased or traded for the Northumbrians’ smooth-riding horses, but we can infer that they apparently took some of these horses with them when they sailed across the sea — to Iceland.

Prior to the Vikings’ arrival, Iceland had no native horses; the Vikings imported their own steeds to the island nation, including some with the DMRT3 mutation. Perhaps thanks to Iceland’s isolation, and also perhaps due to selective breeding, the Icelandic horse developed into a gaited breed: out of 13 specimens from the 9th to 11th centuries, 10 of them possessed the necessary gene. As the Vikings spread from Iceland around the world, presumably they brought their gaited horses with them.

Keep in mind that this Viking story is just a theory, even though the puzzle pieces certainly fit together — researchers still can’t determine for sure whether the gaited gene spread around the world from Iceland, from England’s original gait-gene horses, or from both countries together to develop into the various forms of gaited breeds we see in the world today. Regardless, it’s still a pretty neat piece of research and history, coming together.

[The origin of ambling horses]