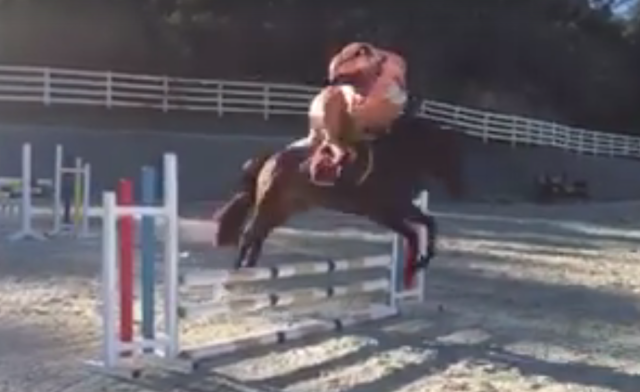 We’re not sure who’s more talented: the horse casually carrying the T-rex, or the T-rex successfully nailing those distances.

I’ve said it before and I’ll say it again: every action is made way funnier by having someone perform it in an inflatable T-rex suit. There’s something about the woefully tiny little arms and the bouncing giant noggin that never fails to make me laugh. And while I thought the guy riding that Paso Fino in a T-rex suit was pretty great, this video from Ralph the Rex of a dinosaur’s day at the barn might be one of the best things ever.

(Okay, so T-rex isn’t quite so talented without the actual horse — who can blame him?) And that’s not all — it turns out that this lovely and most tolerant of horses is for sale! Reader Jennifer Wollenberg, who shared the above video with us, also pointed out that “Abbi” is currently offered for sale (this screenshot is from the Just Hunters, Jumpers and Equitation Horses for Sale or Lease Facebook sales group if you’re interested in learning more):