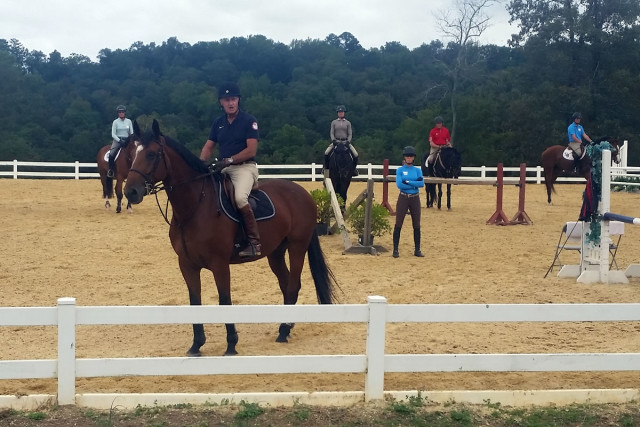 While continuing to tack-walk her rehabbing event horse, adult amateur Ainsely Jacobs rewinds back to September of 2015, when she audited the George Morris clinic at Blackjack Farms.

That is one lucky horse to have George Morris sitting on him! Photo by Ainsley Jacobs/Ride Heels Down.

After months of waiting, wishing, and hoping, much like a child does in anticipation of Christmas morning, I got the news that I was not selected to ride in the George Morris clinic at Blackjack Farms. So, I did what any reasonable fangirl, er, horseperson would do – I went to audit!

My two best barn buddies, Beth and Monique, also wanted to audit, so we met up early on Sunday morning at our home base of Go With It Farm and made the 2.5+ hour drive to Birmingham, Alabama to attend Day 3 of the clinic.

It was rainy and a little chilly, but our excitement wasn’t dampened at all. We grabbed some prime seats and listened attentively to every word that came out of The Master’s mouth. We took copious amounts of notes, drew diagrams, and fantasized about having the nerve to ask for his autograph (spoiler alert: we didn’t).

Through the morning sessions, Mr. Morris was surprisingly lacking in his famed lovably-heinous insults, but not lacking in his tokens of knowledge and insight. He easily conceptualized things I hadn’t quite grasped, and verbalized things I already knew but had never consciously taken into consideration.

During the lunch break, my friends and I enjoyed the downtime to giggle like groupies about the fact that we were in the presence of George freakin’ Morris, and maybe snag more than our fair share of free cookies. Hey, we were only auditing – GHM wouldn’t notice if our breeches were a little tighter tomorrow!

Anyway, at one point, I sat down on a couch to eat, and realized a split-second too late that I had chosen to sit across from George Morris himself. I generally don’t care much for celebrities, but I’ll admit I was star-struck. I sat there, eating in silence, basking in his epicness, and trying not to somehow magically piss him off. I also casually snapped a very stalker-esque picture of him eating, to prove that I had lunch with George Morris! (Kinda. Not really. Whatever.)

I don’t care about Hollywood celebrities, but George Morris is a legend! Photo by Ainsley Jacobs/Ride Heels Down.

The clinic resumed that afternoon, and GHM put his groups through some interesting jump exercises. My friends and I were beyond pleased to see that many of the things he worked on were exactly the same as what our trainer, Halliea Milner, works on with us back home – cool!

All in all, it was a really great day spent learning from one of the greats, and spending some quality fun-time with my barn besties.

If you have to make a tight turn after the jump, ride a short-strided, conservative distance to it. If you have plenty of galloping space after, you can go for the long spot. Within reason, of course … adjust accordingly depending on the jump height/scariness.