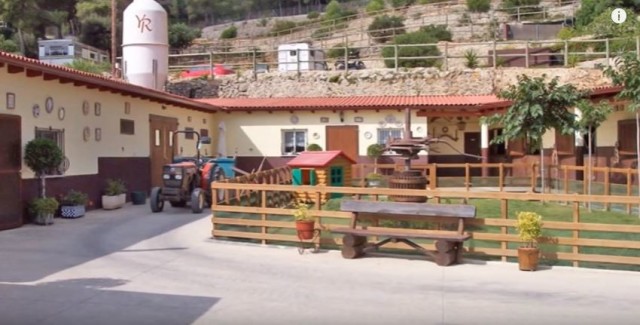 Horses, wine and olive oil forever and ever, amen.

Amigos, bienvenidos a Barcelona! If you have no idea what I just said, this might not be the property for you, but after you’ve seen this beauty, you might be willing to learn. Imagine a world where you’ve already done the crash course of Rosetta Stone, put your life in a crate bound for the Iberian Peninsula, and are now scouting western Europe for a stud and broodmares to put down roots HERE:

Oh yes, that’s 27 acres of Catalonian bliss right there. Set in the hills of one of the most historic and affordable nations in Europe, you have everything you’d really need to die happy. Though you’re less than an hour from Barcelona, TEN MINUTES from the Mediterranean Sea and beach town of Sitges, you’re smackdab in the middle of Spanish horse country. (There’s also a little town called Canyelles just two minutes down the road chock full of charming little Spanish restaurants. Oh this one’s a winner.)

A church on the edge of the sea in the town of Sitges. Photo: Marc Arias/cc

This property includes the stunning Spanish-style barns with 21 box stalls, gorgeous covered and outdoor arena, a grand tack room/social space, two fully outfitted wash racks, outbuildings for hay and equipment, and loads of pristine fenced paddocks with shelters. It’s also fully licensed to be a commercial facility for showing and teaching. (I can haz all the dreamz!) And don’t fret that the covered arena isn’t fully enclosed: The average temperature in Barcelona in the winter is about 60 degrees during daylight hours, which in my home state of Utah is considered swimmin’ hole weather.

There is also a lovely but modestly sized residence with room to host a barn party without being a monstrosity to clean and maintain — perfect for entertaining with an open concept living space with three beds and three baths, but with all the traditional qualities and quirks of a Spanish home. It also features both a prep kitchen and an entertaining kitchen, which I love. And I would like some sangria and croquetas now, please.

And finally, there is a small log cabin residence included for an onsite employee or guest bunk. AKA, the future Horse Nation quest quarters. (I will never stop making this joke on the off chance someone takes us seriously someday.)

Should you decide to buy this dream of a future and live my vicarious dream, please consider adopting me, as I speak pretty terrible but heartfelt Spanish, but more importantly I’m fluent in Spanish cuisine AND Spanish warmbloods. I’ll take perfectly good care of your Andalusians and your paella. Think about it.

The farm is currently listed for €2.2 million ($2.48 million) You can find out more about this property at its original listing here.